A long time ago, I wrote a piece in which I listed some teaching suggestions from Neil Postman’s book, “Teaching as a Subversive Activity.” (http://billgx.edublogs.org/2010/11/24/you-can-lead-a-horse-to-water/)

Some of those suggestions included things like asking more questions than making statements. Or taking every 4th year off to do something other than teaching. Or teaching a subject outside of your specialty. It was a really good list of ideas. I invite you to have a look at it.

Monday, I had a strange experience that happened, and it reminded me of these old suggestions of Postman. My cohort of first year/freshmen students enjoy pranking me from time to time. One time, they piled up all of the chairs in the room against the door, blocking me out. Monday, when I came to class, they all just sat there and smiled. They wouldn’t say a word. No matter what I did, I couldn’t get them to speak. I caught on what was happening, so I decided to teach without speaking either. As it turned out, I had a sore throat and was losing my voice anyway.

I had prepared several worksheets I had planned on working on together as a class, with explanations and examples on the board. Intended as a discussion tool, originally, I had only one handout, but since I feared I wouldn’t be able to speak at length, before class I created a second example, along with a reflective analysis page to get them to think about the implications of the examples we would do together in class.

Instead, I played along with the game. I just handed the worksheets out and made grunts and gestures that I wanted them to work on them. I worked on one myself, and passed the completed one around so they could see how I would solve the problem presented. With the final page, I reflected on the previous ones, to demonstrate what I hoped they would notice from the other two pages. I worked that as well, then passed it around.

Then I collected all of their papers, went to the door, waved goodbye and walked out. This was about 20 minutes before our 75 minute class period was over. I just walked out and never came back. I heard them laughing as I disappeared out of sight.

I love this group of students. They keep me on my toes. I hope I surprised them with my response to their gag. I’m not sure what they were expecting.

I have been using a Macbook Pro for the last five years and it is probably my favorite computer I have used of all time. It has taken all sorts of abuse (nothing intentional) and it keeps on ticking. Most computers I have used, after three or so years, I am ready to trade them in for something new. Not my Macbook.

However after five years of daily use, the poor thing has seen better days. About two years ago my daughter spilt coffee on the keyboard which partially fried it. I’ve been using an external keyboard ever since. While I was nearing completion of my dissertation my power cord/charger started shorting out, getting hot, and wouldn’t charge the battery. I was in a bind because I couldn’t be without a computer, so I cut the cord open and resoldered it back together. Now the other end is getting frayed too, so the thing is covered with black electrical tape. But the last straw was the battery will no longer take a charge, even with the functional power cord.

The nice thing about this Macbook is that the school I work for originally purchased it, and I’ve requested funds for repairing it. After it is refurbished, it will be quite a nice machine. New keyboard, battery & charger. But we are going to install a Solid State Drive to replace the Hard Disk. I like the idea of repairing things rather than disposing of otherwise perfectly good technology. So I expect we’ll get several more years of use out of it.

But for personal use, I have taken the plunge and purchased a new MacBook Pro. It is similar in specs to what I already had – 13 inch monitor (although the new one has a Retina display), 500 Gb drive (solid state rather than HDD), and several new features. One feature I will miss is the built in optical drive, but I bought an external one for when I need it. The new machine is a little lighter in weight and thinner as well.

The big difference for me is the change in OS-X versions. I’m still finding my way around El Capitan. I hate how you can’t find anything when you get a new computer. Some things are personal preferences, but some of the changes are puzzling. The finder application took a lot of customizations. One of the things I use a lot is the path button to aid in navigating the file system. That was hidden from view until I customized the tool bar to show it.

Overall, though, I love the new machine. It is faster and sleeker than what I had before.

Oh, by the way. The new machine has a messages app. I’ve used that on my iPad, but never on my Mac. I just got some photos from my mother in law in Nebraska. She has an iPad too, and has never sent me any messages before, but she did yesterday and they look great on my Retina screen.

So here’s one of her driveway. They got over a foot of snow. Isn’t that funny how the neighbor left her side of the drive? 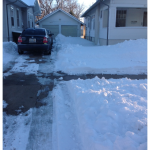 The Kansas Legislature is considering a bill that would force consolidation of small school districts. I am against this plan. Bigger is not better for kids trying to learn. Bigger districts mean longer bus rides and more out of pocket expenses for Kansas families. I think this move will ruin our small rural communities because it will spell the end of our smaller schools.

The community where I lived went through a consolidation a number of years ago. At that time, it was agreed that both towns would maintain an elementary school, and the high school and middle school would be divided between the two towns. However, not long before my kids were of school age, our town’s elementary school was closed after a fierce battle. No one anticipated that event at the initial consolidation, but it happened. And my kids got to experience a bus ride for the better part of an hour as kindergarteners and primary school kids, while the closed school the could have walked to sat empty a couple of blocks away.

My point is, when these plans are proposed, there are always hidden costs that no one considers. And as long as it isn’t my kid that is affected, why not do it? Well, that is short sighted. Here is the e-mail I sent to my legislator:

I am strongly opposed to the bill under consideration for the forced consolidation of school districts. I realize that the present argument says that schools won’t close, only districts will merge for a reduction in administrative costs. I believe if districts consolidate, it will only be a matter of time before closing the smaller schools is a reality. This plan gives too much power to larger population centers over smaller communities. Once our schools are gone, our communities will have no future.

We are now in a digital age where it is possible to live and work from anywhere. It is now possible to reverse the trend of everyone moving away from small towns to seek better opportunities. We are seeing this in Clyde, with young families returning from bigger cities to raise kids. I myself returned to Kansas for the purpose of living a small town rural lifestyle. I could have stayed in California and worked in the technology industry. Instead, I moved back home in hopes of raising my family here.

Consolidation will destroy the very fabric of what makes Kansas Kansas, our small towns and rural communities, just when new possibilities exist. You look at any town that has lost its school, and you will see a town that is dead or dying. Don’t do this to Kansas. Find another way. If saving administrative costs is the goal, I’m sure this can be done without merging school districts. Neighboring districts can possibly share a superintendent. Incentivize these kinds of resource-sharing collaborations, but don’t wreck our schools with this myopic consolidation plan.

We are counting on you.