For a number of years now, I’ve been reading and learning about the struggles that young people face and I’ve been particularly interested in the struggles of boys and young men. For a long time now, our modern version of school has not been a good fit for boys, with its model of sitting quietly for extended periods of time, with the declining use of recess in school, with the fact that most teachers in the early grades are female, there are a whole host of reasons why school loses its relevance early on for many boys.

In our culture, there is a “correct” way to be a boy and later a man. You must hide your weaknesses and hide any feelings you may be feeling except maybe for anger. Anything perceived to be weak or feminine is to be avoided at all costs.

Recently I’ve been watching a fascinating video documentary called The Mask You Live In. It is all about the narrative that we tell boys and young men on the “right way” to be a man. The documentary is very engaging and does a lot to explain the problems that boys and men are currently experiencing. It illustrates the very narrow ways in which we expect boys to develop and behave.

I think men need to push back against this narrative that all males need to be one certain way. While I think there is a place for using social mores to control undesired behaviors–any child can become rotten little wild animals if their parents do nothing to control behavior–but expecting every little boy to grow up to be a tough guy goes against the fact that there are many personality types that boys can have. No wonder there is depression and confusion about what it means to be male when maleness is so narrowly defined.

To me, the ultimate expression of maleness is being a husband and a dad. I realize this is not everyone’s ideal and to push my ideal onto others would be just as problematic as having any other narrow ideal. But for me, having a family, providing for them, protecting them, sacrificing for them, teaching them how to live a life worth living are the most important things I can do.

Fortunately, in this country and in this technology-driven world, I am able to do these things for my family without being a muscle-bound behemoth. Intelligence and ambition do just fine. It makes me sad that so many boys (and men) are made to feel inadequate because they don’t meet someone else’s standard of what male should look like. I say find out what your purpose is and do that. Find out why God put you here and you will be fine.

Some other books I’ve read on this subject include:

This article about why excessive consumption limits your creativity is spot on accurate in its observations. We do consume far more than we create. Most people create and add very little value to the digital ecosystem, myself included. As social media (aka web 2.0) has caught on and ramped up, it has become harder and harder to pull oneself from the allure of all that information. But we have to do it if we hope to be more than simple consumers. This is my hope for myself and for my students–that we all become something more than consumers–that we can become makers and creators.

The excessive consumption article gives a number of reasons why we should be conscious of our consumption/creation ratio and I won’t go into all of that again here. It also gives three suggestions for reducing our inflow of information, which I will briefly mention.

I couldn’t find the recommended extension for my browser and I couldn’t quickly find an alternative. But I have been reducing my time on casual social media use in recent weeks and have been known to take several weeks long breaks from all social media use as well. Making time to do other things is vitally important, and for myself, doing a 30-day challenge project was a great way to divert my attention away from the frivolous and on to something more meaningful.

This is another favorite thing of mine to do. I always try to keep a paper notebook and pen handy. The author of the article I’ve shared says they usually write all posts out by hand before posting them on the web. I don’t go that far, but many of my post ideas come from ideas jotted down in a paper notebook. Also, I enjoy going back through notes from time to time. Many times I will see great ideas that I’ve never acted on, and in some cases, I’ve successfully resurrected some old ideas, particularly ideas that have to do with my teaching.

So take a look at your inflow/outflow consumption/creation ratio. You might be able to make a simple adjustment here that improves your life. 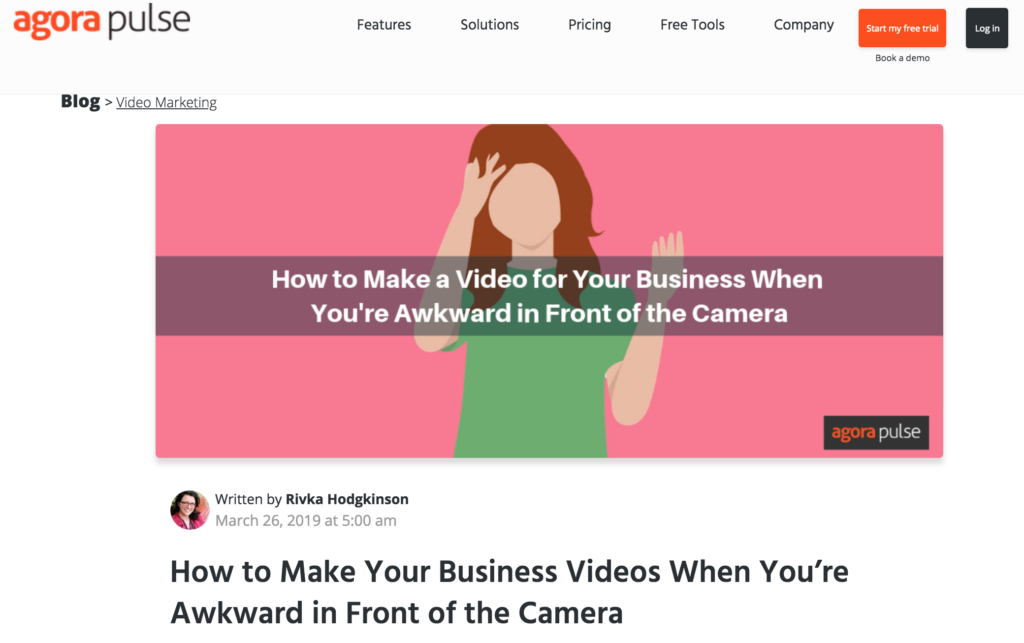 The enticing post title “How to Make Your Business Videos When You’re Awkward in Front of the Camera” caught my eye. It was one of those serendipitous moments that often happen when browsing the web; I arrived on it from another site where I was looking at some original artwork that I found while doing some other research. The business video post caught my attention for a number of reasons, but I’m sharing it here today, not for the information about video making per se, but because it is an excellent example of something called the “freemium model.”

I don’t recall exactly where I originally heard the word freemium, but it comes from the idea of giving away something of value (free + premium) with the idea that it builds goodwill, brand recognition along with the opportunity to make purchases for add ons or other related products.

Much of the world wide web was built on the freemium model. Early adopters of the web remember the “browser wars” in which Netscape and Microsoft battled for dominance of the world’s browser users. At the time, Netscape offered the basic Netscape Navigator browser for free, but charged a fee for its more robust “Gold” version of the browser. Microsoft entered the browser space with an Internet Explorer browser similar to Netscape’s premium browser but gave the software away for free. Microsoft also included the browser with every new copy of its Windows operating system, which led to a famous anti-trust lawsuit (analysis paper pdf download).

Anyway, the point of all of this is to illustrate the fact that players in the digital world have been giving away digital goodies for free for a long time in the hope of gaining followers, new customers and so forth, and I thought the article about making business videos is a great example of the freemium concept. The advice provided is good advice; it contributes value to anyone who struggles with making quality video content. However, in the end, the article is offered as a service but also as an advertisement for Agora Pulse, a social media management system.

I haven’t used Agora Pulse and can’t comment on its value as a social media tool, but I was impressed enough by the small amount that I saw to write this post. Why? Because the writing I found is superb and of value to me and I liked the simple design graphics that I saw on the website as well. When designing for the web these days, we have only seconds to gain and hold a reader’s attention before they move on to something else. The Agora Pulse site did a number of things right and I thought it was worthy of mentioning here on my own blog.

In Tokyo, Japan there is a cafe that employs people with spinal cord injuries and people with the debilitating ALS disease. These people, confined to a hospital bed, work as servers in the cafe by using remotely controlled robots.

I think this is a brilliant use of robotic technology. I’ve been looking a bit into using telepresence robots in schools and nursing homes. 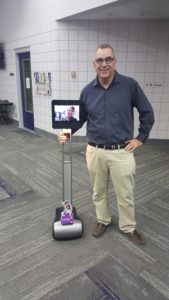 Our English professor, Kaleen Knopp had a surgery that kept her home-bound for some time was able to continue working remotely by operating our telepresence robot. Our robot only provides a virtual presence, it does not have any arms with which to interact with the remote environment. So she needed an on-the-ground assistant in the classroom to help with things happening in class, but with this support, she was able to teach her class without missing a day.

I think having a robot with remotely controlled arms is the logical next step in this sort of technology and I think it is astounding that this sort of technology enables those who could not otherwise interact easily with the outside world to not simply be present to others, but actually have productive employment by serving others in a restaurant. How absolutely wonderful for those people who are doing the serving and who are being served. This is an internet-of-things device that truly makes the world a better place!

Today Christians around the world are celebrating this day as “Ash Wednesday” or the day in which we are called to remember that we are mortal beings, with only a finite number of days. By reflecting on the fact that we are composed of elements which come from the Earth and we will one day return those elements to the Earth, we are compelled to examine how we are using the precious days that we do have while we are here.

I remember the one day during my first year as a college student, my professor, Dr. Chad Davies revealed to us that all elemental matter, including the elements from which our own bodies are constructed, originated from inside of ancient stars that exploded and spread the heavy elements throughout the universe. My mind sort of exploded like those stars! Now wait a sec… I came from inside of stars? How does that jibe with what I was taught as a youngster about people being created by God?

“Remember man, that you are dust and to dust you shall return.”

Hmm, I am basically made of dirt. I come from the Earth and will one day return to it. The elements come from stars that exploded. The Earth formed from those elements. The Earth’s creatures are composed of the elements of the Earth.

As I learned more, I also learned about the Big Bang Theory of the origin of the universe. It is that point in time where there was nothing at all, and from the nothingness, a big bang occurred. First, a blinding light, followed by heat and some primordial stuff that ejected out and became the first stars.

“Let there be light” -God

Robert Spitzer wrote a fascinating book called, New Proofs for the Existence of God: Contributions of Contemporary Physics and Philosophy which explores important questions about the formation of the universe. He discusses the precision with which the universe got its start. A few degrees cooler, no big bang. A few degrees warmer, nothing is sustained. It was a perfect setup for the beginnings of the universe and of us.

When I think of Ash Wednesday, I think of the sciencey things I have learned about how the universe was made, how the Earth was formed and how people later appeared, composed of elements coming from exploding stars by way of the dust of the Earth, and I think to myself that there is really no contradiction between the truths of science and the truths of faith in a creator God. Of course there are differences in how these two ways of knowing arrive at what is true, but in the end, the truth is the truth.