Yesterday’s Daily Create was pretty interesting. We started with a photograph of a silly man holding a pumpkin, then everyone added something new to the story. This assignment was basically a simplified take on the original Layers Tennis game with one person contributing a few changes to an existing image. (There is also a Layers Tennis assignment in the DS106 assignment bank.)

@dogtrax started us off with this offering:

@ds106dc #tdc2464 #ds106 #dailycreate What he didn’t know, not until later, was that inside the pumpkin was the story. That the story would unfold in the most unusual ways. It was only later, after the knife carved the door and the story tumbled with seeds, that it all happened.

I couldn’t resist the temptation to join in the fun, so I did this revision

Someone suggested the pumpkin man would be a good addition, so I found a green screen version and put him right in.

And then there was more weirdness… #tdc2464 #dailycreate #ds106 pic.twitter.com/hJX8JrDlZb

Because it took me a while to add the dancing pumpkin man, a fork in the creativity happened and a new chain of events.

This one was near the end last night.

and that children, is how goes the story of “the pumpkin, ghouls, immortals, ben, masks, cat, gremblin—” #ds106 #tdc2464 pic.twitter.com/2bHPgU4f0o

I really enjoyed seeing this one progress. 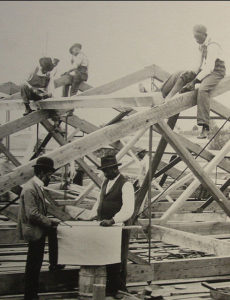 This week I invited students in our large group session of our freshman Mastering Academic Conversations class to use a Twitter backchannel to share comments as I was presenting. For the most part, it was a bust. I don’t think I explained clearly enough the purpose and value of having an online backchannel conversation during a large presentation. There were only a couple of comments, both were negative. Since the only feedback I got was negative, I thought I’d take a moment to respond to one of the comments here.
Early in the presentation, I mentioned that Kansas State University is having a diversity celebration called #KSUnite in which afternoon classes are canceled on Tuesday of this week, and a number of activities are planned. On our Polytechnic campus, our student government formulated a plan that includes a campus beautification and clean up (we’ve had some challenges in that area this year) followed by a picnic and games.
Evidently, one student in the room took issue with being asked to help tidy things up on campus and wrote this tweet:

I’ve been thinking about this comment, and how it is likely that some of our other students feel the same way. It made me think about Booker T. Washington’s “Up From Slavery” in which he describes the founding and construction of the Tuskegee Institute. (The link above is to a chapter that talks about this.) I feel like although we aren’t building up a new school from scratch, in many ways at K-State Polytechnic we are also in a building period that is reimagining what our school can be as well.
B.T. Washington required each Tuskegee student to work at the school, and it was met with protests from students and their parents alike.

Quite a number of letters came from parents protesting against their children engaging in labour while they were in the school. Other parents came to the school to protest in person. Most of the new students brought a written or a verbal request from their parents to the effect that they wanted their children taught nothing but books. The more books, the larger they were, and the longer the titles printed upon them, the better pleased the students and their parents seemed to be.

Washington stated that some students left in frustration, but more came to replace them and the school experienced successful growth. People recognized the value of what he was trying to teach. Tuskegee students themselves built all of the buildings of their new campus and in doing so took great pride and ownership. He writes,

Not a few times, when a new student has been led into the temptation of marring the looks of some building by leadpencil marks or by the cuts of a jack-knife, I have heard an old student remind him: “Don’t do that. That is our building. I helped put it up.”

I think maybe it is time for us to double-down on this group-working idea. I even wonder if we emphasized it and highlighted it, it could actually bolster the enrollment at our school? It might be one of those counter-intuitive paradoxes of life. The students don’t like being made to do it, but it has value, is actually good for them and although it will frustrate some, the end result will be a stronger community and family. People – the right sort of people – will recognize the value in our unique community and ultimately will want to come to study with us.
In our recent class discussions, I am gaining a sense that at least some of our students are frustrated by and are ready to push back against our always-on, always-digitally-connected, and always-distracted ways. I think some are actually searching for authentic connections; a better way to live that possibly includes some counter-intuitive, counter-cultural ideas. Crazy ideas like helping to clean up the campus.

I found this easy way to make an animatronic creature for Halloween. I plan to try it!