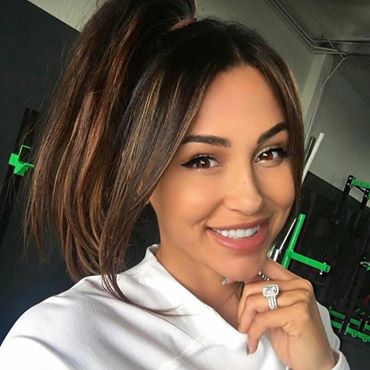 My annoyance with Facebook continues to grow. Quite a few years ago people were getting frustrated with the fact that Facebook loosened default privacy settings without warning. This was well documented by Matt McKeon’s Evolution of Facebook Privacy graphic back in 2010. It showed how restrictions were relaxed between 2005 and 2010, without any notice to user. Facebook regularly changes its terms of service, and users opt in by continuing to use the service. Many people started leaving the service even back then, but most people stayed, and even more people joined.

I understood even back then that Facebook’s true customers are the companies that purchase data sets and advertising, not the end users who utilize the platform to communicate with each other. This is a simple part of media literacy.

Anyway, I recently received a friend request from the beautiful woman in the picture above. When this happens and I don’t happen to know the beautiful woman, I always am skeptical. So before I clicked the “heck yeah!” button, I did an image search on Google with her profile image. Did you know you can do that? Just go to https://images.google.com and upload an image you want Google to search for. Anyway, I did with this image above and found thousands of copies of this image. It didn’t take me long to learn the actual woman pictured is a former Playboy model.

The name didn’t match the name on the profile of the friend request. Instead of simply ignoring the request like I normally do, I reported it to Facebook as a spam account. A few days later I received a reply that my report couldn’t be verified!

Umm, Facebook. I took the time to look into it for you. I told you what the problem was. You ignored me. I am very weary of your tone-deaf attitude on privacy and security. Even when your long-time members are doing the work you should be doing, you shoot it down!

Now you are spending millions of dollars on television advertisements telling us how you are getting it right? Lame.

Facebook, I use you. But I no longer love you, and that’s not likely to ever change. I’d love to replace you, but so far I haven’t found the thing that can take your place. Give me time.

This weekend my son, his friend and I went to see Ready Player One. Now my son and I have been anticipating this movie ever since they announced the book would be made into a movie. I first read the book as a part of the K-State Book Network (KSBN) common read program, in which a book is selected by committee and read university wide by incoming freshmen. Ready Player One was the book chosen for 2013, and our campus where I work in Salina had a lot of activities related to the book. So I passed it on to my son who read it around age 12 and he loved it. The book does contain some harsh language and themes, so parents looking for a book for kids to read be advised about that.

However, the movie felt like it cleaned a lot of that up as compared to the book. It is still PG-13, and there are a few questionable moments for really small kids, but nothing more than in any other Steven Spielberg show you might have seen.

We’ve been anxiously waiting for this movie to come out, and we finally got to go see it last weekend. One thing to consider when you are a fan of a given book and heading to see a film based on a book is that books and films are two different forms of media. Both forms have strengths and shortcomings, so it is unfair to directly compare the two. My friend, K-State Librarian and KSBN guru Tara Coleman says:

So I kept an open mind at the film, and tried to see it without nit-picking too much that this detail or that was left out of the picture. I think it helps when you approach it using that mindset.

I do think it is fair to expect the film to keep with the spirit of the book and not change the overall story in that light. The main ideas need to be preserved, and I think that the Ready Player One film succeeds in this regard. Also, I appreciate that some large plot details were changed, in that it allowed me to see a new story unfold without knowing exactly what to expect next. I won’t spoil the film for you in disclosing any of them here, other than to let you know that you can expect a few surprises that are fulfilling and enjoyable. I found myself laughing out loud at some of them, and at the end I wanted to cheer and applaud. I wonder if attendees at larger screenings that actually happened?

I’m not a film critic, and I don’t get really hung up on details that the pros might. I just expect to be entertained with a good story when I see a movie. I am so tired of attending films that have weak stories, I am to the point where I’m very skeptical and very choosy about what I will pay money to go see or not see.

I came away from this one feeling satisfied, even rewarded. The thing moves along nicely. Typically, in many if not most films I can sense when I’m getting bored and things aren’t moving along as quickly as they should. Often times it is because they are showing me details that I really don’t care that much about. (I’m looking at you War for the Planet of the Apes and The Last Jedi ). If I notice myself getting bored and feeling the “willing suspension of disbelief” dissipating, there’s a good chance I won’t feel good about recommending the show to my friends. That was never really the case with Ready Player One.

Some of the battle scenes, some of the CGI stuff I felt were a bit overdone. But I feel that way about a lot of the comic book based movies that are being made. In fact, the trailers that I saw before seeing the movie all felt that way, so I was a little leery going in. But I’m willing to forgive a bit of that so long as the story is reasonably good, and in this case it was.

Overall, it was a good story, reasonably faithful to the spirit of the book, presented some new ideas and surprises, and I walked out of it feeling satisfied. I give it two thumbs up. It is one movie of a very small list that I might actually consider watching again. 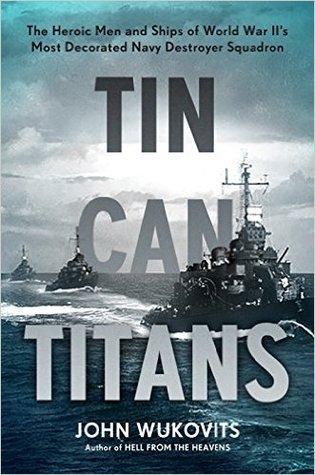 I resubscribed to Audible audio book service and have been listening to books during my hour long commute to and from work. Last week I finished Tin Can Titans by John Wukovits.

The book captured my imagination immediately by introducing the scene of American ships entering into Tokyo Bay just before the Japanese surrender in WWII. I spent two years aboard the US Navy destroyer USS Cochrane (DDG-21), that was forward deployed at the Yokosuka naval base in Tokyo Bay. The hills around that  base and city were pockmarked with tunnels and caves that had been dug during WWII and sealed up after the war. After that hitch, I spent two more years aboard the USS Missouri (BB-63) so I’ve always been a Pacific fleet guy and interested in things that happened there in WWII. Here is part of the book’s opening:

Admiral William F. Halsey had not been this satisfied since before the war. As he looked across the waters of Tokyo Bay on August 29, 1945, from the bridge of his flagship, the USS Missouri–the battleship nicknamed “Mighty Mo”–a conglomeration of battleships and cruisers steamed behind in a long line stretching to the horizon…

Halsey might justifiably place his Missouri in the first spot, giving his battleship the honor of taking the victorious United States into Tokyo Bay as conquering heroes come to lay claim on a defeated foe. He instead handed that honor to a trio of destroyers, O’Bannon (DD-450), Nicholas (DD-449), and Taylor (DD-468), smaller vessels dwarfed in size by “Mighty Mo,” which followed them in line.

I could tell this would be my kind of book. Destroyers and Mighty Mo. I smiled at the thought. This introduction had three things I knew, destroyers, Tokyo Bay, and the battleship Missouri. Here is a photo of me recently shared on social media by a shipmate on the USS Missouri (BB-63)

I frequently wondered about the war and the history of what happened. As I walked around the Yokosuka base and the decks of the Missouri, it was hard not to wonder about all of the history that had happened right there where I stood.

I read a couple of history books back then, but little about the role of destroyers in winning WWII. One book I do remember reading back then was called Retaking the Philippines, so I was familiar with MacArthur’s campaign in that country. I spent a lot of time time at Subic Bay and used that book to learn more about the last stand at Corregidor and the Bataan Death March, as well as MacArthur’s return to Leyte Gulf.

Tin Can Titans was especially fascinating to me given the places I have seen and been. Of course I had heard of Guadalcanal, but never had full appreciation of the importance of winning there. According to Tin Can Titans, Guadalcanal was the key to turning the tide of the war. Lose Guadalcanal and chances were good that the entire Pacific could be lost, including Australia. Destroyers played a vital role in securing that victory.

As a tin can sailor myself, I understood the role of these ships as one of expendibility. We were there to be on the front lines, to run picket keeping the enemy far from more important assets like carriers and such. On a tin can, you can hear the ocean sloshing against the hull right where you sleep.  More than once, I imagined how little it would take for something to come right through that bulkhead and have ocean come pouring in on us as we slept.

The Tin Can Titans book does a nice job of explaining what it was like for the destroyer men of WWII. They spent many long hours in battle. Sometimes having no rest from the previous engagement before the fighting resumed. It wasn’t overly difficult to sink these ships. Some were struck by gunfire or devastated by kamikazes.

I was moved by the fact that the Fletcher-class destroyers lead the way into Tokyo bay at the conclusion of the war. I think Halsey made a right choice in doing that. Many of these ships had been heavily damaged or sunk, and they all were the work horses of the fleet, taking it on the chin to protect the bigger “more valuable” capital ships.

If you enjoy WWII history, particularly Pacific war history or naval history, you will really enjoy Tin Can Titans.