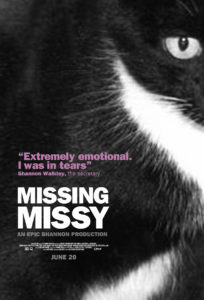 I found this story by David Thorne about a missing cat several years ago. I always laugh out loud every time I revisit it. I love sharing it with my design students when the topic of conversing with design  clients comes up. Please enjoy: Missing Missy.

Seventy years after he died as a prisoner of war in the Korean conflict, the remains of a heroic priest, Fr. Emil Kapaun, have been found! Fr. Kapaun was born and raised right here in Kansas and is now being considered for canonization as a saint.

According to the Manhattan Mercury, Father Kapaun was a Kansas-born priest who served the US Army as a chaplain in WWII and the Korean war:

Father Kapaun was born in 1916 in Pilsen, a small farming community in Marion County. He was ordained into the priesthood in 1940 at what is now Newman University. A mural honoring Kapaun adorns the school’s chapel.

Father Kapaun was named a “Servant of God” by the Vatican as an initial step in the cause for sainthood. Read more about Fr. Kapaun on the Wichita Diocese website.

I’m very glad to see some educators are moving their classrooms outside. We did this with my classes last fall and we enjoyed some very pleasant days outside right up to the Thanksgiving break. I plan to do the same again next fall. And now that it is warming up, we’ll do it this spring as well with weather that cooperates.

I have been dropping in from time to time in my colleague, Professor Kathy B’s Finance class. Her class has created a miniature mutual fund, for fun, with every student choosing a stock to “purchase” and follow throughout the semester. She encouraged me to pick a stock as well, so sort of at random, I chose Lowes, Inc. because it is a local store and many of our students work there. One student in the class is a former Lowes employee and thought I was foolish to pick that one, so I get ribbed every time it goes down and I gloat whenever it goes up.

I have also been listening to The Bible in a Year podcast with Fr. Mike Schmitz during my morning commute. It was the top podcast on Apple iTunes for a while, now it is at #5. Yesterday, something I heard that resonated with me. The verse is from Deuteronomy 8:17-18 and it goes like this:

Do not say to yourself, “My power and the might of my own hand have gotten me this wealth.” But remember the Lord your God, for it is he who gives you power to get wealth…

I think it is a very good perspective to keep in mind when it comes to building wealth. Many years ago, when our first child was small and we were expecting our second child to come very soon, my wife received word that the company where she had worked for 30+ years was filing for bankruptcy and she was going to be out of a job. At the time, we had really over-extended ourselves with consumer credit and an expensive, brand-new Chevy Avalanche truck. We had been living a life we really couldn’t afford, and things were looking bleak. Our immediate reaction was that we too would soon also be bankrupt because who would want to hire a (very) expectant mother for a mid-to-high-level supervisory position like the one she was leaving?

Late one evening, I was driving home from visiting my mother-in-law and my wife was still staying with her for a while before the baby came. I happened upon a talk-radio show with this fellow dispensing financial advice that was based upon Christian, biblical principles. What kind of show is this? I wondered. It turns out, it was Dave Ramsey, who was not so widely known then as he is these days. In fact, at the time I couldn’t find a station around my home tha carried his show, so I became a regular listener to his program by his podcast downloads.

That was nearly 20 years ago. Over the years, we have (mostly) followed his sound advice and we now find our financial situation to be much improved over those bleak days. When I look at how much our retirement savings have grown and I see that retirement isn’t all that far into the future anymore, I often wonder how this ever happened to us. We were so lost back then, and though we are still far from perfect when it comes to financial wisdom, we have come far along the path.

So what happened to pull us out of that deep hole? Well, for one thing, capitalism happened. Dave Ramsey calls it the snowball. Success builds upon success. Setting goals and following a wise plan really works. When you start saving to an investment portfolio, over time, the money you save itself makes money. Then that money makes money, along with the original money. Over and over, the snowball grows and grows.

Napoleon Hill in “Think and Grow Rich” called this The Law of Increasing Returns. Whether it is the farmer planting a seed that over time will return seeds a hundred-fold, or the regular saver who builds up a nest-egg of investments that begin to pay off, in a way it feels a little bit like magic. It feels almost like the universe is required to respect your hard work and diligence and pay you back for your efforts.

But as the verse from Deuteronomy says, it isn’t my own hand’s power and might, it was something greater than myself. I just followed a plan in accord with how the world works. But believers recognize that it is God’s handiwork behind the powerful growth that takes place. It doesn’t happen by itself—we have to contribute something ourselves. We have to act with wisdom and be patient. And it can easily get out of kilter if we start thinking that we caused it all by ourselves or if we start thinking our life revolves all around the creation and retention of wealth.

Typically, I don’t even check our portfolio that often. It is only more frequently on my mind right now because I drop in on a finance class every now and again. Sometimes I will take a peek at things when I hear the news that the market has really increased, but I don’t really obsess about it on a day-to-day basis. Sometimes I will go months and months at a time without even thinking about what is going on with investments. I have more important things to occupy my heart and mind. Maybe as I age, I will become more concerned about it. But right now, I’m just following the plan that we’ve made and sticking to sound principles that work. It seems to be working out so far.