Yesterday I attended the Kansas State University shindig recognizing this year’s promoted faculty. We have some amazing people working at this place. There were professors hailing from all over the world. Everyone was from somewhere else, it seemed, and I think that’s pretty normal in academia. It’s not very prestigious for everyone to be home-grown.

But I was there too. A Marysville High School graduate, from just up the road to K-State. A military veteran, recruited out of Manhattan, KS. A Cloud County Community College graduate among scholars from MIT and Harvard. And yes, proudly a graduate of, with my final degree earned at Kansas State University.

Doesn’t it seem just a little bit strange that I was the stranger there, the odd one, being the Kansas native with the background I have? But there I was, a professor at K-State. So happy, and so proud to be serving the people of the state that I call home – Kansas.

The evening of Thanksgiving in 2015, about a year and a half ago, I experienced the worst stomach ache I’ve ever had. We were staying in a hotel visiting family, and I spent several hours writhing in pain on the floor of the room. No stores were open, and I didn’t have any stomach remedies with me, so I just sat there and suffered. I figured that I had over-eaten, and left it at that.

After that, not too long afterwards, it happened again. I figured that I was either eating too much, or there were certain foods that no longer agreed with me. So I began watching how much I would eat and tried to pay attention to the kinds of foods that would trigger it.

I figure over the past year and a half, I’ve had similar episodes of severe stomach pain 4-5 times, with some lesser ones thrown in as well. Sometimes, if I realized it was likely to happen, I could stave it off by going for walks.

Historically, I haven’t really been one for seeing doctors. I’d never been to the emergency room. The last time I was a hospital patient was when I was born. I knew something was going on with my health, but I didn’t know exactly what, or what to do about it. But after my last stomach episode, I decided if it happened again, I’d go to the doctor or ER.

Last Saturday evening, after a delicious meal of crock pot roast beef & potatoes, the pain started up again. It was the worst I’d ever felt. I was coughing, vomiting, and had unbelievable discomfort in my gut, a pressure that couldn’t be relieved. Finally, around 11pm, I decided to go to the ER.

Now the hospital is 15 miles away and I decided to drive myself there. Probably not the best decision to drive myself, but it was late, and I didn’t want to upset the family. I told my wife where I was going, and let the kids sleep. When I finally arrived at the hospital, it felt like it was taking forever to get checked in and answer all of their questions.

Oh, it hurt! But it seemed like it was taking forever to get any relief. Drawing blood. Asking questions. Trying to figure out what was going on with me. Finally, they gave me an IV and some pain killers and I was able to relax. I was getting woozy, and had to lie down. Soon, I was getting X-rayed and CT scanned, and with those results we knew I had a problem with my gallbladder, and it had to come out.

I had to go to another hospital an hour away to have surgery, so that meant I’d go for my first ambulance ride. I called my wife and told her to meet me there. I was so tired, I slept most of that ride. Once I got checked into the Salina hospital, there were more tests, more questions, and explanations about what was going to happen. I would be having emergency surgery. It was all happening so fast. Incredibly fast, really. In less than 20 hours, I would go to the ER, transfer to another hospital, have my gallbladder removed, and return home again.

Here we are, just before going into the operating room. I was obviously feeling no pain at this point. 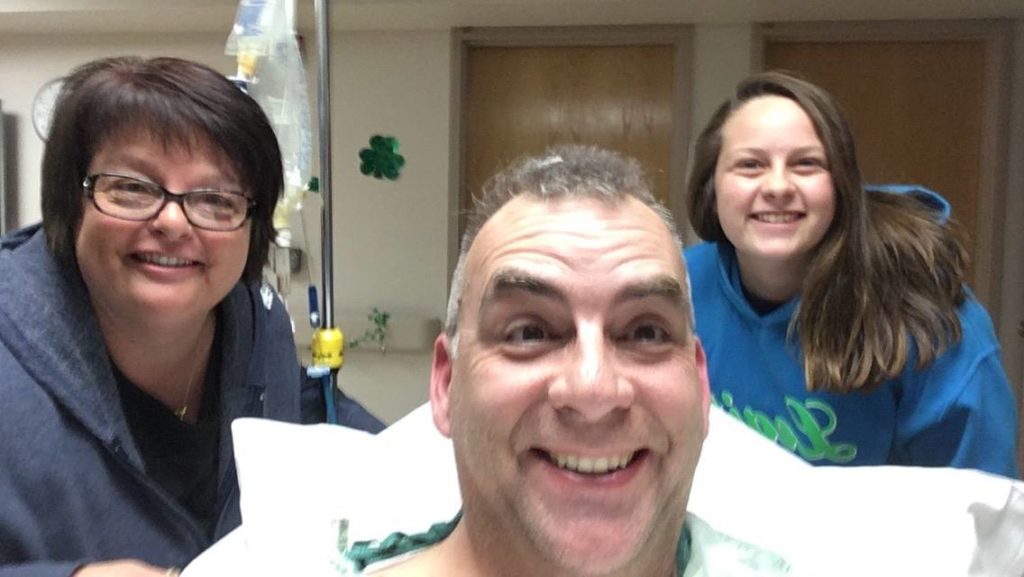 I probably should have been more nervous about things than I was, but heading into the operating room, it only took a couple of minutes and it was lights out for me. 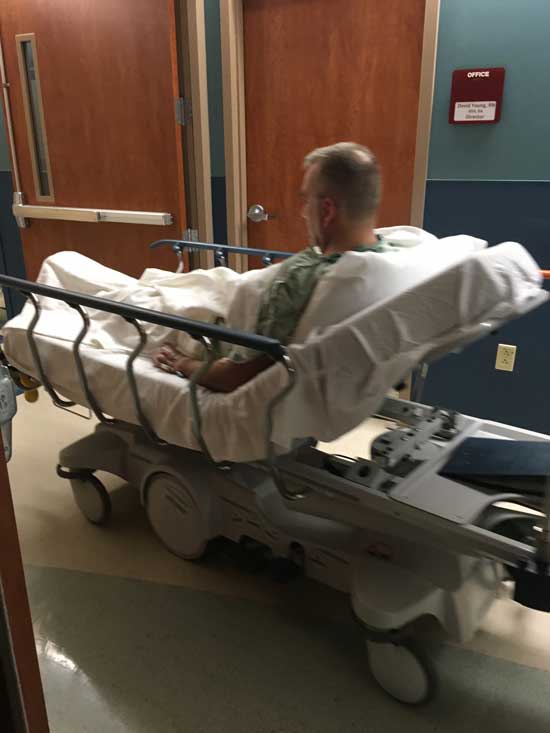 It only felt like a couple of minutes later, and I was awake again and the surgery was already done. I was amazed that I was able to walk within a few hours after surgery. I was sent home on the same day. I was able to take my dog for a walk that evening. A big part of the speedy recovery is that it was a laparoscopic surgery done with cameras and four small incisions instead of one large one.

The wifi was good in the room. 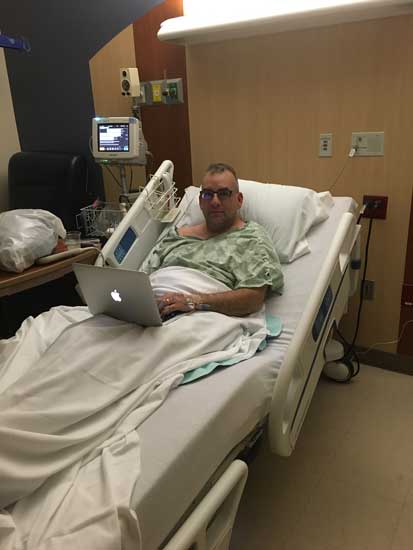 I used the walker to regain my legs. My daughter asked me to do a dab. 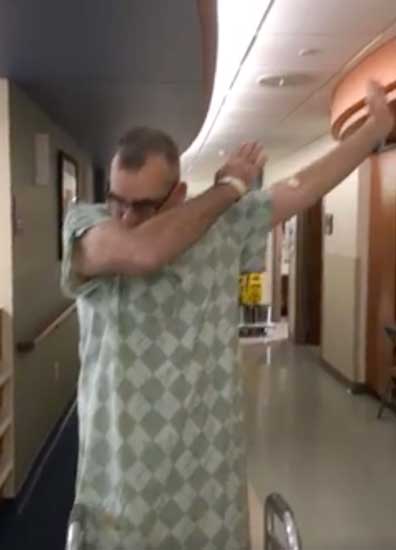 Recovery has been pretty quick. I’ve had some tenderness and soreness, but overall things are getting back to normal pretty quickly.

Today I was reading Fulton Sheen’s book Life of Christ when I came across the word “valedictory” and I had no clue as to its meaning. That is what happens when you read Sheen, he is going to lay some big words on you and you are going to learn something along the way.

Sheen was referring to Mary’s command at the wedding of Cana to the wine stewards, “Do whatever he tells you.” These are the last words of the mother of Christ recorded in scripture. And being so, they are a clue to the meaning of the word “valedictory.”

When I want to understand the meaning and origin of a word, many times I consult the online etymology dictionary. So I looked up “valedictory” and I learned it means “departing words.” Ok, that makes sense; Sheen is referring to Mary’s departing words.

Intrigued, I dig a little deeper. Valedictorian is a common word stemming from the word valedictory. It means one who speaks departing words. Digging a little deeper, the Latin root words are Valere – “be strong” (like valor) and Dicere – “to say” (like diction).

Again, I had no idea that the job of valedictorian literally is to tell departing classmates at commencement to “be strong.” I thought it was just an honorific bestowed on the student with the highest GPA. I learned something new today. This past Sunday at church we heard about the letter Kurt Vonnegut wrote to school children shortly before he passed away. To me, the essence of the advice he gave was this:

Practice any art, music, singing, dancing, acting, drawing, painting, sculpting, poetry, fiction, essays, reportage, no matter how well or badly, not to get money and fame, but to experience becoming, to find out what’s inside you, to make your soul grow.

Indeed, make your soul grow. Today is the beginning of the season of Lent, a time when many Christians reflect on the state of their own souls and on their relationship with God. Our pastor used the Vonnegut letter to bring in this new liturgical season.

I have a couple of confessions to make. One confession is, I haven’t been practicing much art at all even though it is one of my most favorite things. A year ago last Christmas our family got a new electric piano, and I spent weeks playing on that thing. Now it’s probably been a year passed since I was last on it. I’ve started up sketch books, journals, watercolors, blogs, etc. etc. but life gets so busy I don’t keep them up. So this Lent, I hope to do a little more of these favorite things and a little less of things that are distracting but ultimately time-wasters.

Another confession, I’ve not read Kurt Vonnegut before. That is before last night, when I downloaded an e-book of Slaughterhouse-Five. Something about that title I suppose that didn’t attract me. But once I started reading, I was hooked. He was talking about the Bombing of Dresden in WWII. I’d never heard about that part of the war, so I looked it up on Wikipedia. Incredible. Unbelievable. Tens of thousands of people killed in a few days.

And in reading Vonnegut, it sounded like he’d actually been there. He was. He was a prisoner of war in Dresden, and survived the bombing by hiding in a meatlocker of the slaughterhouse where he was being held prisoner. I haven’t read a lot of the book, but I get the sense that maybe this is a book that all war veterans, such as myself, should read.

I know Slaughterhouse-Five is a classic and I should have read it before now. But better late than never, right? Like I said, over the next several weeks, I hope to be doing lots of things that help nourish and grow my soul. It’s about time.