I was recently thumbing through the book The Art of Social Media: Power Tips for Power Users by Guy Kawasaki & Peg Fitzpatrick and I came across a gem of a suggestion for handling heated topics and comments online. If you’re like me, you sometimes post something that is controversial and then the subsequent commentary quickly spirals out of control. I don’t mind getting into an online discussion and sharing my opinions as well as seeing the opinions of others, but over the years it has become painfully obvious to me that it is impossible to win an argument on the Internet.

That’s why I really like Mr. Kawasaki’s suggestion of going three rounds:

My suggestion is that you embrace the rules of amateur boxing and fight for only three rounds. The opening bell is you share a post. Ding-ding. Round 1: Commenter comments. Round 2: You respond. Round 3: Commenter responds to the response. End of fight.

How simple is that? You share something. You make your position known. Your guests get to have their voice heard. They even get the final word. I like it. Now if I can only remember to use it.

This semester I’m teaching online for the first time in many years, and it is a course that I’ve never taught online before, Social Media. Now if there was ever a course that makes sense to do online, I think it would be a Social Media class. (If you’re interested in seeing us in action, check the #digme406 hashtag on Twitter.)

One of the things I did was require my students to video chat with me. Some opted to use telepresence robot. Some just used Skype or Facetime.

This week, I had a video chat with a student who gave me a suggestion I hadn’t thought about. I mentioned that I noticed there is a flurry of activity on Sunday night when all of the week’s assignments are due. This student is a 100% online student, so her perspective was really helpful. She said some classes have a number of small assignments due through out the week to encourage regular participation. In other words, I’m shooting myself in the foot by making everything due once a week on Sunday night.

It was a great suggestion. I think these one on one conversations are great for improving the course. I think they are important for feeling connected to the students, and for them to feel connected as well.

One thing I did that seems to be working well is the Study Buddy assignment. I required everyone to make contact with three others in the class in the first week. These contacts seem to be sticking, as several have reported having regular contact with their study buddies. That makes me feel good, because it is not unusual to go an entire week without hearing from any student. I think the suggestion of staggering assignments is the way to go, to make sure everyone is regularly checking in.

After coming across the Near-Sighted Monkey’s post on using a drawing exercise for taking attendance, I had to share it here. This is absolutely the most creative way I’ve ever seen for taking attendance in a class. Starting with an original drawing, each student was to copy the drawing exactly except substituting the face with a drawing of their own face.

I love the idea of giving a creative assignment like this for taking attendance. I’m going to think about similar creative ways to take attendance in my classes. Well done!

Podcasts. I love ’em. I listen to a number of podcasts on a variety of topics. I’ve listened to design podcasts, storytelling podcasts (This American Life is my favorite), podcasts about faith and spirituality, history podcasts, science podcasts and of course podcasts about education.

I recently heard about the Higher Education Podcast Project  Right now there are over 100 podcasts listed related to teaching/learning/professional development in higher education. I’ve only listened to one so far, and it is excellent. It is the The Teaching in Higher Ed podcast. You can be sure I will be looking through the list and giving some more a listen. Podcasts are a great way to turn your car into a rolling classroom of learning!

For a while, I have been intrigued by the possibility of the graphic syllabus. I was particularly inspired by the work of Lynda Barry and her hand drawn syllabus book. I have seen some of these graphical syllabi floating around the web, and a few years ago I decided to give it a try with my Visual Literacy class. It only made sense that I would employ some of the concepts of visual communication in the syllabus for that course. Here is a copy of what that one looks like in infographic format: 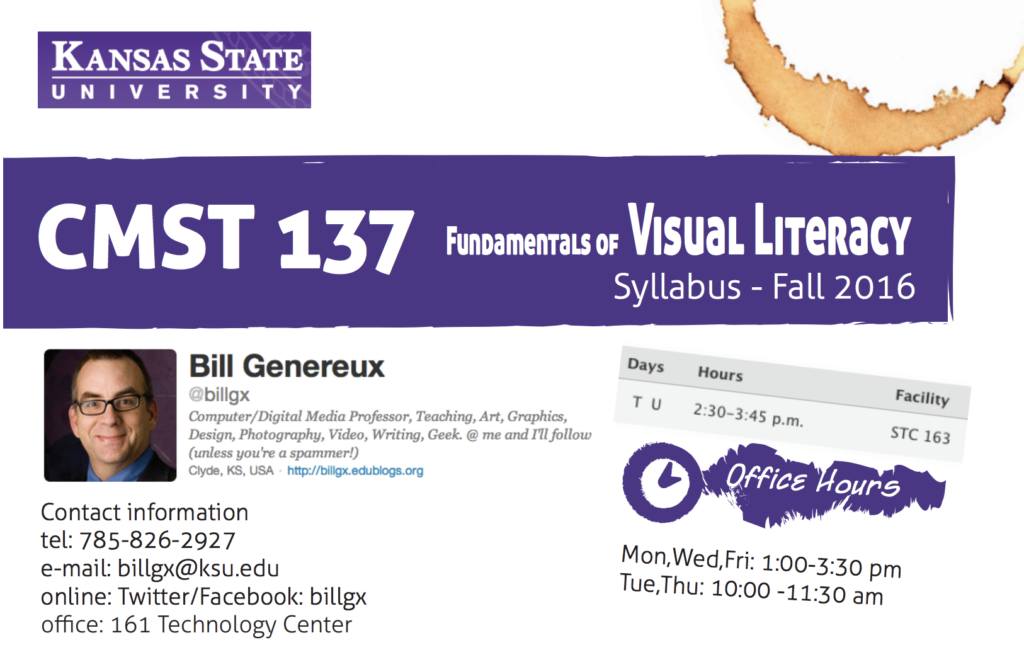 And below is another one I did for my Fall 2017 edition of an online course I taught in Digital Literacy. The theme for that online course was “Superheroes” so I had a lot of fun developing a syllabus in comic book format: 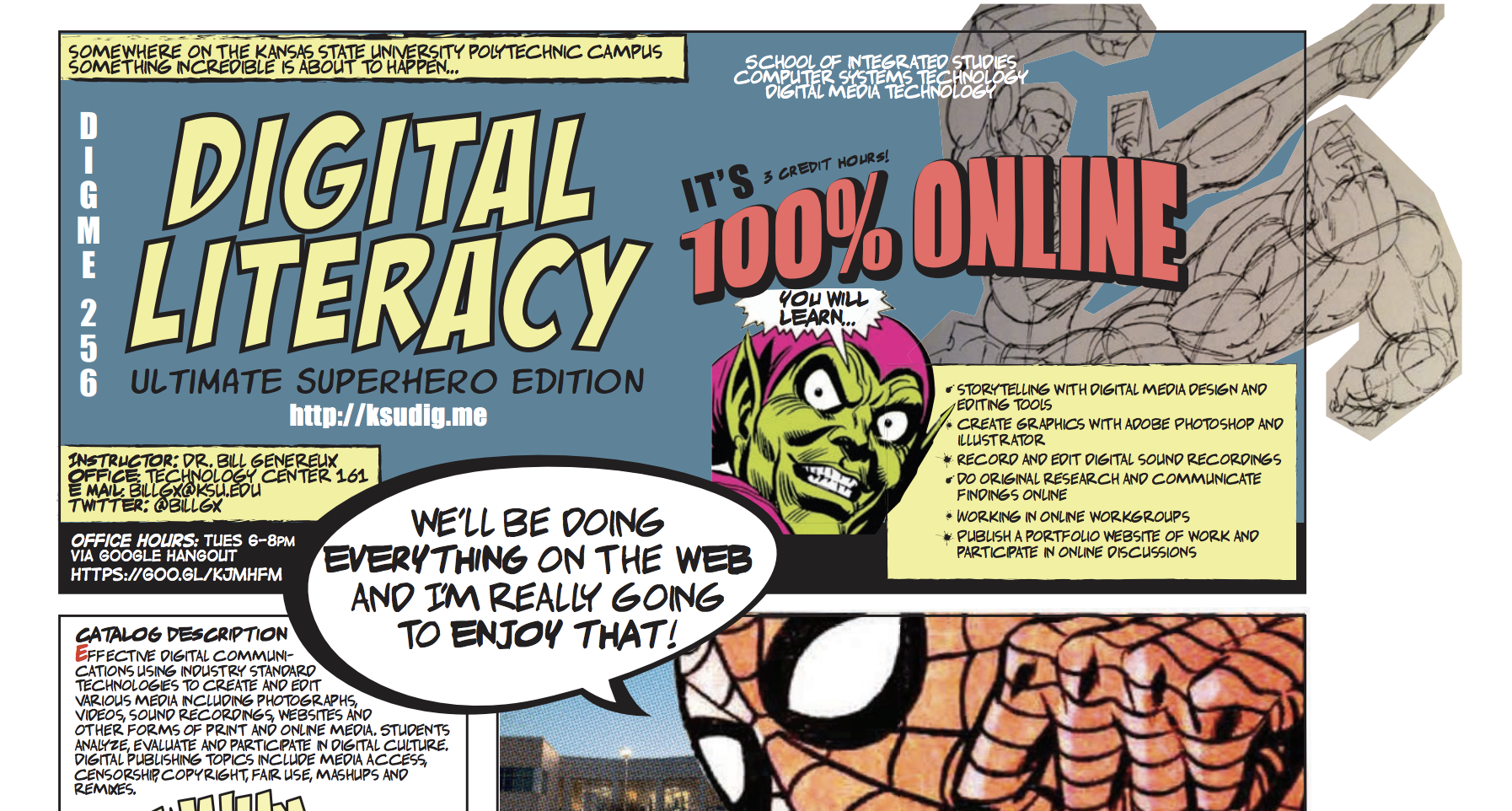 I was perusing the offerings of online classes this summer, specifically looking for things that would make good electives for students in our digital media (DigMe) degree. Since we are a small campus here at K-State Polytechnic, and have limited offerings in the arts and humanities, I often look online to see what my students can take through distance learning at K-State.

Wow, what a bunch of courses I found! There have always been a few, but I’ve never seen a list as long as this one before for digital media students to consider. I have compiled a list and am sharing it here, in case some K-State students happen to see this and are thinking about a summer distance class that involves fine arts, humanities or digital media technologies. 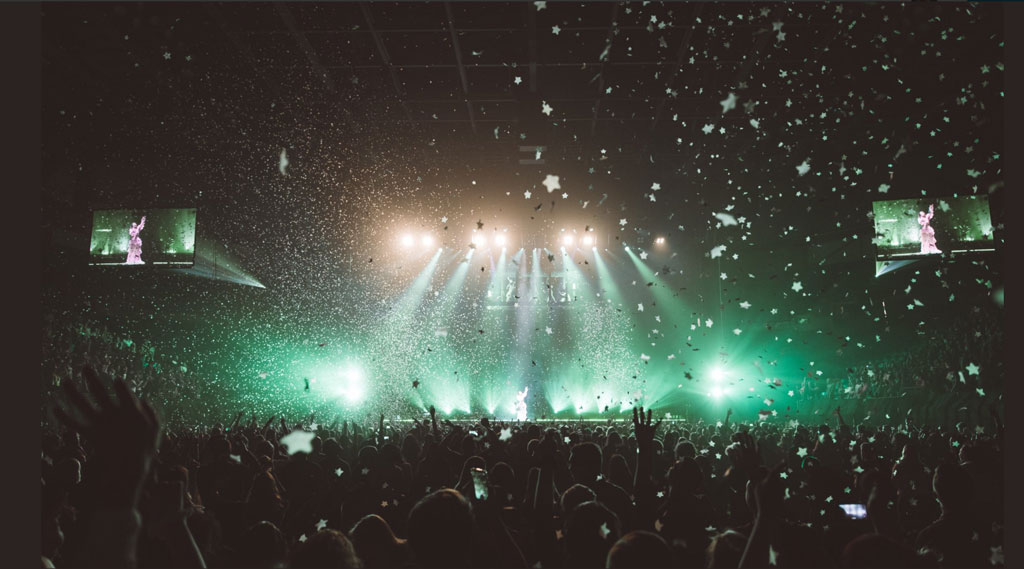 Yesterday I took my kids to see Lorde concert. Thanks Vettix for the free tickets! The whole idea behind Vettix is to give something beck to those who have served. Event tickets provide veterans and active service members an opportunity to get out and do things with family and friends. It is a kind gesture to a population known to struggle with state of mind.

This was my third concert with Vettix, and the first with my kids. My Daughter is 16 and son is 14. Emily loves Lorde. She’s a musician, so even though she’s just a kid, I do tend to respect what she thinks is good. I have heard a few Lorde songs but wasn’t well familiar with her work. I had Em give me a crash course in Lorde discography on the way to the concert in the car – thanks Spotify!

Lorde is really interesting musically. It’s not like the bubble gum pop songs of my youth. She’s no Debbie Gibson. I could tell right away that Lorde is a true artist. And my initial response to her songs was that they were very different, in a weird, poetic way. I asked Emily if she writes her own stuff but she didn’t know. But I’m thinking this stuff is so original I highly doubt she’s performing someone else’s material. I could be mistaken, but I’m fairly certain she writes all of her stuff and you have to respect a musician who does that.

When we arrived a few minutes after 7pm, the opening act was already playing. And it was a Lorde song. We’re missing it! Emily was getting upset. I was confused. I’ve never been to a concert where the headliner started at the advertised time. But it seemed to be a Lorde song and it sounded just like her! It was Tove Styrke, I think. She was almost like a Lorde impersonator. We soon figured it out and had a giggle about it. 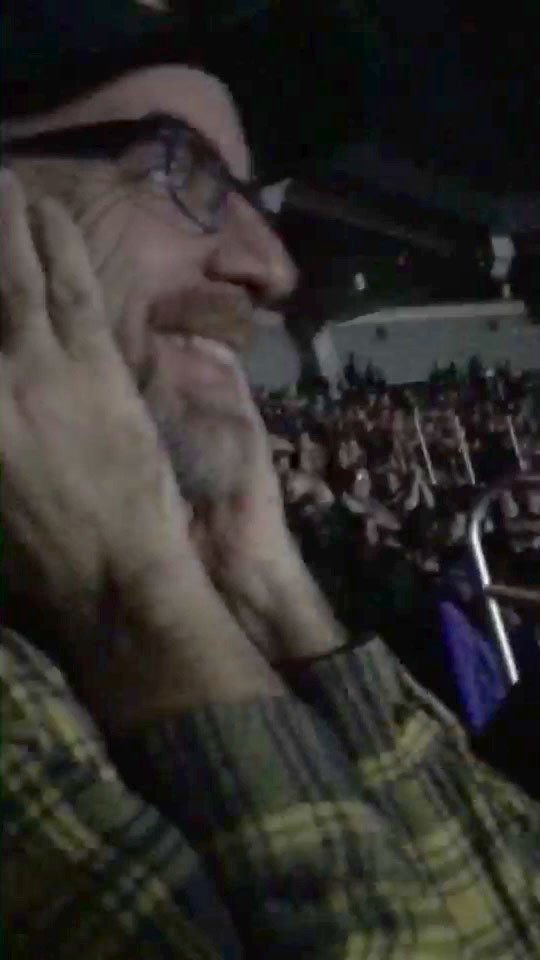 Intermission. And then another act took the stage. Run The Jewels. They were very loud. And foul mouthed. And brash. Made my ears hurt.  And it was so not my thing. About the only part of their performance I enjoyed was the parts of it was the oscillating sub frequencies that turned my seat into a rather effective massage chair.  Hopefully the experience will serve as a reminder to never attend another concert without a set of ear plugs. I’m getting too old for this stuff! A day later, my ears are still ringing.

Around 9 o’clock we finally get to see Lorde. Emily is out getting some dippin dots ice cream when the lights dim. Where is she!? The music starts, still no Emily. But just as her idol starts to sing, she returns with her dots of ice cream.  There were lights. And smoke. And sonic sensations. My daughter was loving it. 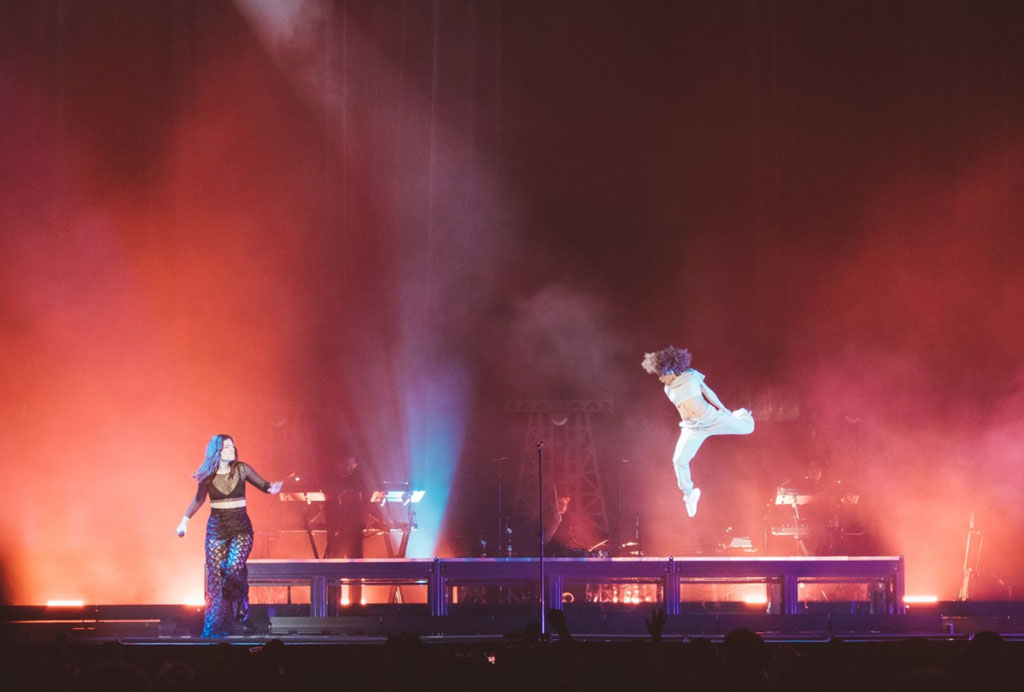 It was very theatrical. We stayed for the whole thing. Even the encore songs. And we slipped out ahead of the crowd since our seats were at the rear of the stadium. And our parking was nearby. And we made it back to our hotel without fighting much heavy traffic. I’m sure a few minutes delay and it would have been gridlock. It was coming in. We stopped at one parking lot and the attendant said “there’s a concert tonight?” I laughed because we thought that was why all the traffic. There’s a car show and a basketball game too.

So it was a fun trip overall, and exactly as the Vettix goals state, we had a great family experience. My daughter’s first ever concert and she was thrilled. My son’s too, but the jury is still out on that. I think he’d like to see Ted Nugent or some other classic rock band better. 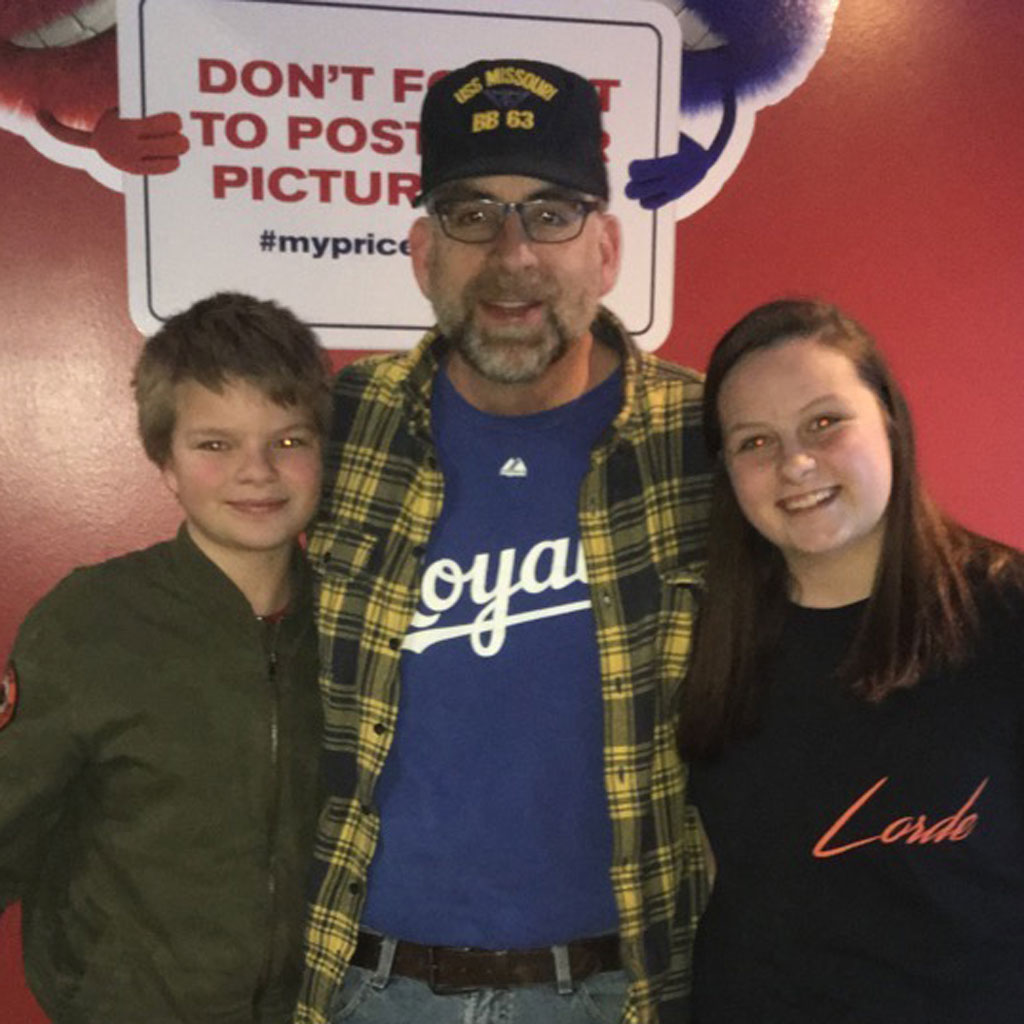 A big thank you to VetTix and AEG Presents for the gift of concert tickets to Lorde: Melodrama World Tour in Kansas City, MO. I took my kids to this concert. I probably wouldn’t have picked this one myself, but my 16 year old daughter is a huge Lorde fan. (Even bigger now that she’s seen a live performance!)

VetTix has the goal of helping veterans to be involved in the community and doing fun things with family and friends. I can’t tell you how much in means to me that someone cares enough to do this for us. For me, it is a really big deal. I even wore my USS Missouri ballcap. A USS Missouri sailor attending a Missouri concert, what do you know about that?

We are from a small town in Kansas, 3 hours drive to Kansas City, so for us this concert was a big time adventure. My daughter is 16 and my son is 14 and neither have seen a big name concert like this before. It was really fun to see their eyes light up at seeing the world class performance.

Thanks so much VetTix and AEG! 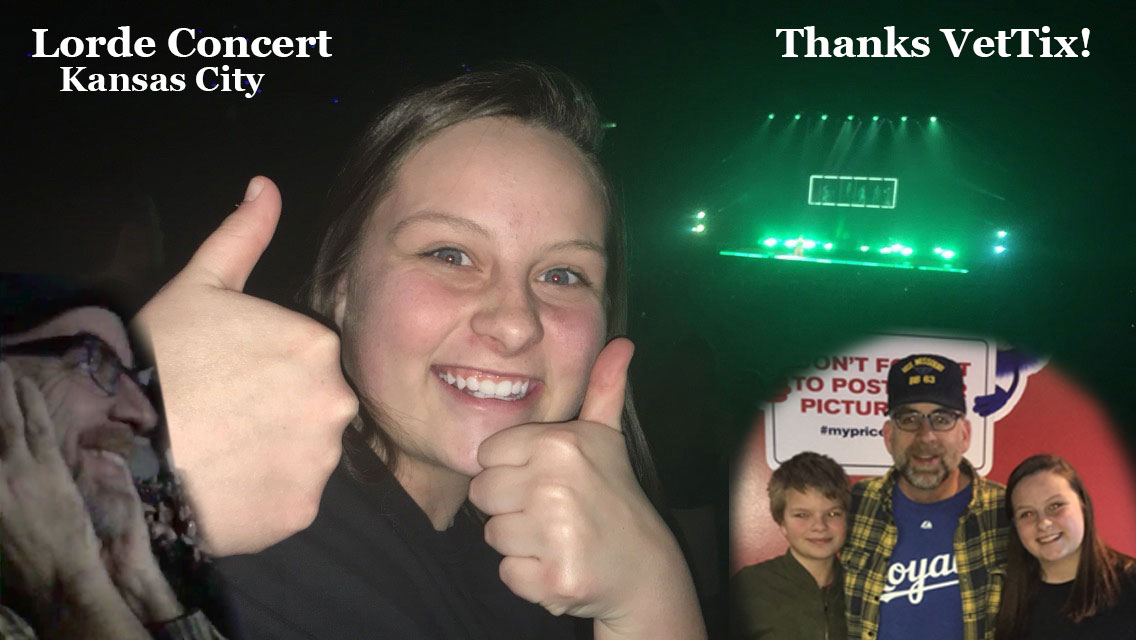