Yesterday we had the first snow of the season. When I went outside in the morning, it was foggy and below freezing. As a result, there were several frost-encrusted spider webs around my yard. They were beautiful, so I took some photos. 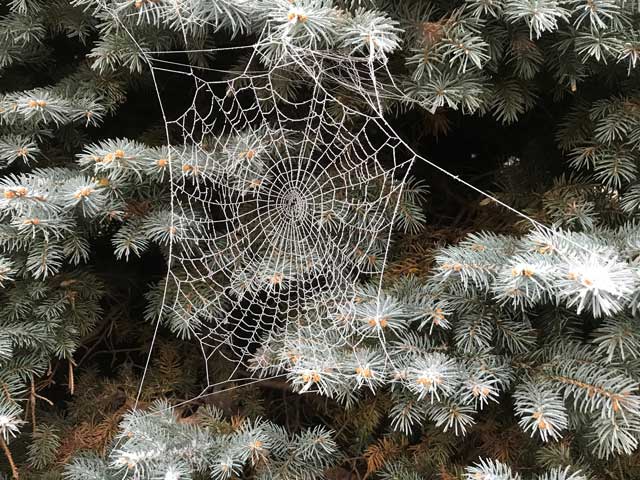 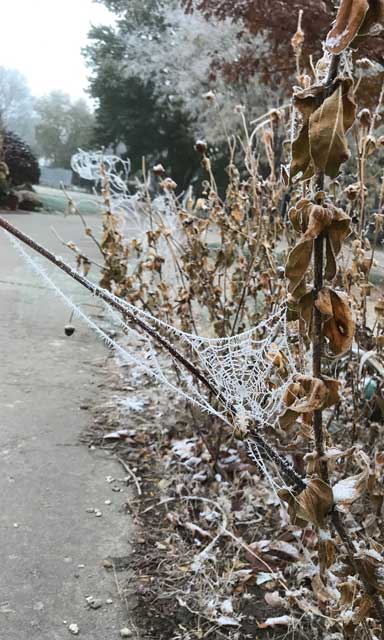 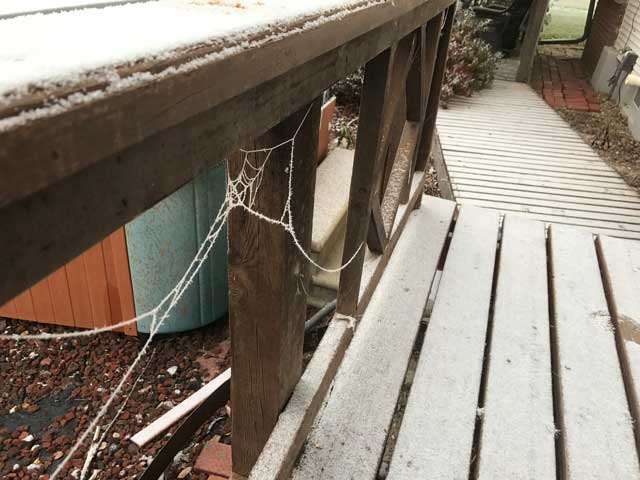 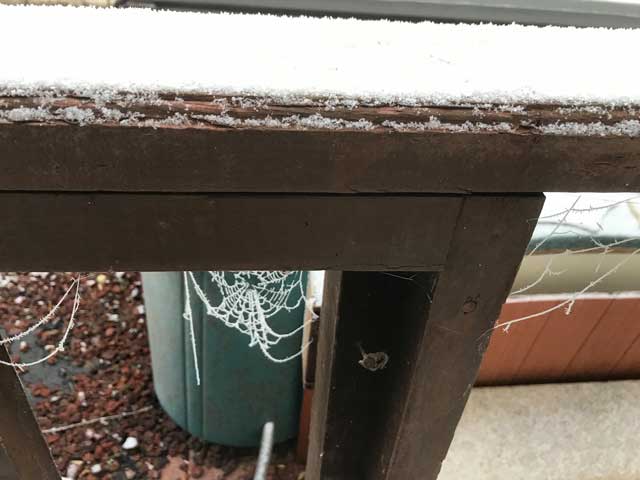 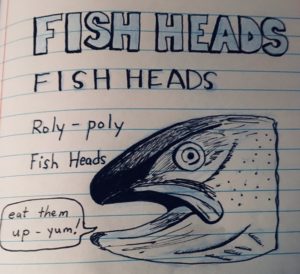 In a Facetime chat with my friend Maximo Alacar this week, he mentioned they were having “salmon head soup” for dinner. Max is my buddy from the Navy. He grew up in the Philippines and is largely responsible for the predilection that my family has for Asian food. 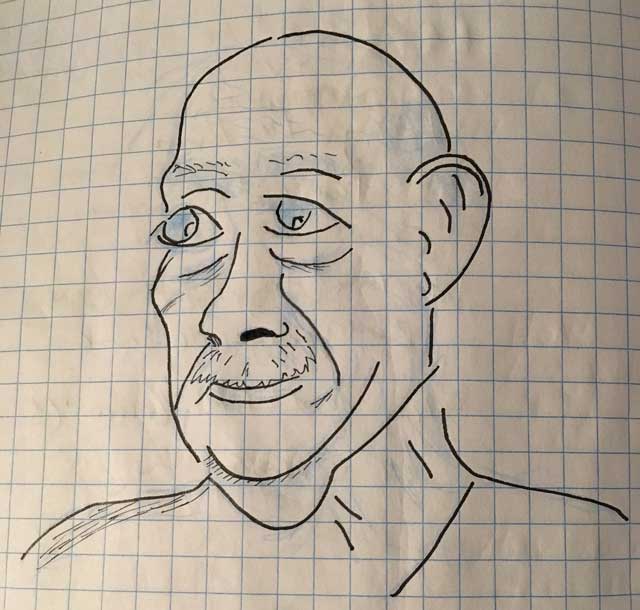 Around here, we eat rice probably as much as we eat potatoes, which is an unusual thing in Kansas. I’m kind of picky about the rice I eat. No “Uncle Ben’s” or “Minute Rice” around here. I like to go to the Asian store to get white jasmine rice fresh from Thailand or Vietnam.

But I’ve never had fish-head soup before. Below is the recipe Max said to try. He said it is called sinigang na ulo. I might actually try it.

Max said I could use the head of the trout I caught a while back that is still in my freezer. The vegetables, I can grow in my garden. Since it is all wintery, and I’m out of fresh garden vegetables, it might be a while until I get around to trying this dish. 😉

I have to admit that when I heard about sinigang na ulo, I also heard a theme song for it. The Doctor Demento song “Fish Heads.” But this morning, when I went to look for the song to share here, I was surprised to learn that there is a video that goes with the song. I had no idea! Anyway, here is the Fish Heads song with video. I dedicate it to my dear friend Max.

Yesterday when I was out exercising my dog Daisy, she got really excited and wanted to chase after a creature she saw. It was a fox! There was a fox running through the edge of town! I’ve never seen a fox in town here before. I was on my bike, so we followed it for a while, but wow that thing was really fast! 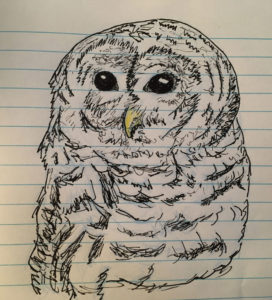 I’ve been hearing a lot of Barred Owls lately. I didn’t hear much from them during the summer months, but we have been hearing them all winter long for several years now.

According to Wikipedia, these owls haven’t been common on the Great Plains states, but in recent years they have followed the Missouri River and its tributaries westward. This makes sense to me. We live right along the Republican River, one of the Missouri’s tributaries. The barred owls have finally found their way to us. Sometimes I can count six or seven hooting and calling to each other. If you haven’t heard their calls, they are really unique.

This is a recording I made of them calling outside of our house a couple of years ago.

Lynda Barry’s self-portraits using old catalog cards from the library. Computer databases make these obsolete. What a wonderful way to repurpose these. 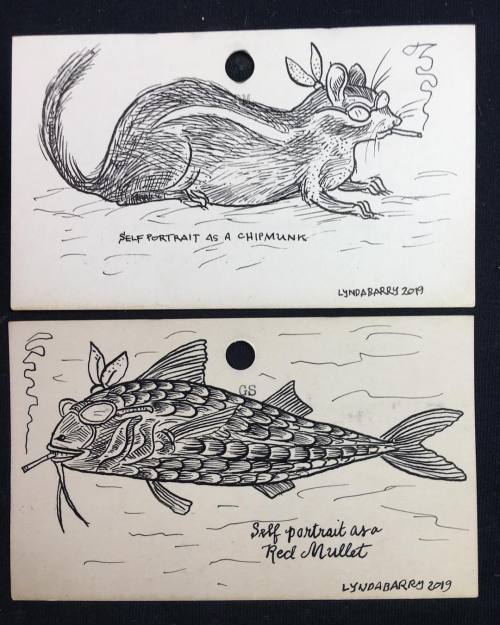 If you feel lost, draw.

I thoroughly enjoyed the movie A Dog’s Purpose. It is a heartwarming and family-friendly film. I don’t enjoy going to movies at the theater anymore. I’ve repeatedly spent too much money only to be greatly disappointed. I have a habit of DVRing shows that seem to have potential when I’m scanning through the listings and this is one that I had recorded. This way, if the show doesn’t work out I can just stop and delete it.

I wasn’t even tempted to stop watching this movie even though I’m not a big fan of animal movies. If you are a dog lover, you will like this one. It’s well worth your time. 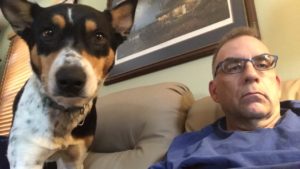 I am working on learning to do this:

Right now, all I can do is the melody. I’ll check back in when I’ve learned his technique. 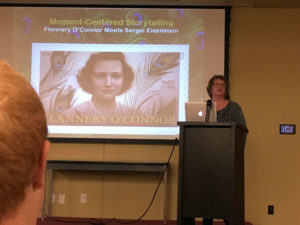 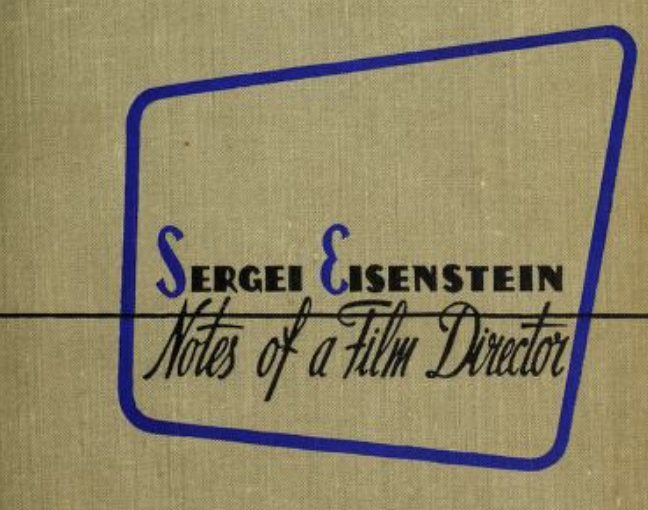 Artist Francoise Gilot has been an artist for over 75 years. As a young woman, she was with Pablo Picasso for a decade and bore him two children. She was the only one of Picasso’s many love interests to walk away from him before he left them. You gotta admire that.

Her 1964 memoir of Life With Picasso was recently re-released back in print.

I found this special insight on technology this morning when reading about my favorite artist/author Lynda Barry. Technology always gives us things and also takes things away from us. As someone keenly interested in creativity, I have had hunches about this before but haven’t ever seen this precise observation on the impact of our use of mobile phones:

“The phone gives us a lot but it takes away three key elements of discovery: loneliness, uncertainty and boredom. Those have always been where creative ideas come from.”