I was watching this interview with singer/songwriter John Prine, which is wonderful in itself and I recommend watching it. But the host of the Prine interview was also so familiar. Who is that guy? I wondered. Then at the end of the interview, John Prine says, “Thank You, Ted Kooser.” Of course, I know who Ted Kooser is.

Years ago, I read a book by Ted Kooser about writing poetry. I even tried doing it for a while, but I didn’t keep it up. But this morning I wondered where is Ted Kooser now? In searching for the answer to that question, I found his homepage with this short documentary video about Kooser and his life and work.

Ted Kooser says a great deal about the creative process in this piece. Every day, he gets up at 4:30 am each day and works until seven. A part that really struck me is his statement,

Once or twice a month I come up with something that was worth my time—the rest of the time, I’m failing.

I was drawn to the video because I often give my students the assignment of making a mini-documentary about someone interesting. How can you introduce someone to the world through video? Do it like the video Passing Through from Straw Hat Visuals on Vimeo.

Wow, I learned something really cool and easy to do today. To create an “em dash” using a Mac computer, simply click Option+Shift+Minus (the – key) and boom, you have the ever-cool em dash character! It looks like this: —

You can use the em dash in a sentence instead of a comma, a colon, or even parentheses. I’ll have to keep this in mind because I have an affinity for writing parenthetical thoughts. Em dashes can enhance readability.

You should not use an em dash when a hyphen is required, such as in hyphenated word combinations. To do so would make you a two-bit, no-account, good-for-nothing ninny-muggins.

Read the full skinny on when to use the em dash at The Punctuation Guide.com.

I made some MP3 audio recordings of vinyl LP records so I can listen to them in my car. The only problem is, these recordings contain the entire side of an LP, I would like to skip to specific songs when playing them back on my car’s stereo. To do this, I needed to split the long audio file into individual song MP3 files. A quick Google search showed me how to do this in Adobe Audition.

This got the job done for me in a short amount of time, but I had to first select the song waveforms in Audacity and create a range marker for each song.

This is not a huge job because you can typically spot the silence between each song visually. It only took a few minutes to create the range markers for an album with 12 songs in it. The nice part about doing it this way is that you can name each range marker and use that name as the resulting MP3 file names in the export.

There is a similar process used in Audacity that I have used before as well, but I had never done this in Audition before. 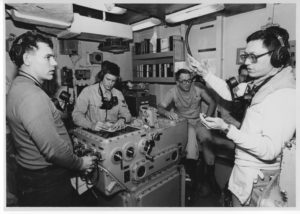 We were a couple of miles off the coast of Kuwait, operating in a “box” about ten miles long by half a mile wide. Several days before, two naval ships, the USS Tripoli and the USS Princeton had struck mines in these waters. Our operations area had been swept and declared clear of mines, but we were still moving at a fairly slow speed and in tight quarters. It takes most of that available half mile just to turn a battleship around.

We had been conducting naval gunfire support (shore bombardment) for some time with the sixteens striking various targets inland, such as tanks, munitions dumps, etc. The men and equipment you see in the photo were responsible for aiming and firing the sixteen-inch guns from this compartment, the forward main battery plotting room. Suddenly the captain’s frantic voice blared out of the 1MC, “missile inbound, all hands brace for shock!” So we stopped what we were doing and everyone thought, “oh no, we might die.” Then we bent our knees, stood on the balls of our feet, and braced ourselves against whatever solid thing we could find while we waited to see what would happen. 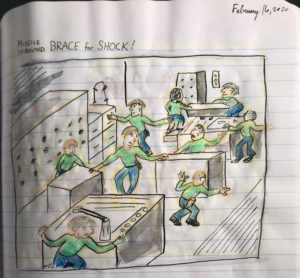 I thought about our friends who were topside in the fire control directors. Not long before, I had been assigned to one of the directors and knew that if we were struck, those men who were assigned outside of the safety of the armored belt that protected engines and fire control equipment would be in the most danger. Those men later reported that they could see the missile streaking towards us across the sky.

There were two Silkworm missiles fired at us that evening; the first one fell harmlessly into the ocean completely missing us and the second heading right at us was shot down by the HMS Gloucester in what turned out to be the first successful missile to missile combat engagement in naval history. The only actual damage we received was some friendly fire from another escort ship (I will have to look up what ship that was)  but there were no injuries.

The friendly fire incident was also historic. It might have been the first time a military autonomous robot fired at and struck a friendly unit in combat. The neighboring ship (USS Jarrett?) had put the Phalanx CIWS into “full auto” mode, meaning it would detect and engage all threats without human intervention. When the USS Missouri saw the missile heading its way, the electronic warfare men activated anti-missile countermeasures. One of these, our SRBOC chaff launcher, fired a canister of chaff that was meant to distract the missile away from us, but it inadvertently also got the attention of the full-auto CIWS on the other ship. The CIWS automatically opened fire with its 2,000 round per minute depleted uranium Gatling gun and hit the Missouri a few times by accident.

In the end, we survived unscathed and were thankful to be alive. 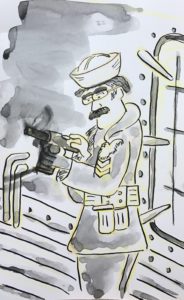 One of the most memorable moments for me during Operation Desert Storm was the night before hostilities began. I had duty as the Petty Officer the Watch on the forward quarterdeck of the Battleship Missouri. I knew something new was happening, something big was coming very soon.

I knew things were different that day because I was ordered to place a magazine clip of 45 caliber ammunition into my US Navy issue Colt pistol.

At that point in my career as a United States Navy sailor, I had stood numerous watches as an armed guard. On my previous ship, the USS Cochrane, I and the others in the gunnery division were a part of the ship’s security force. All ships that are nuclear-capable have specialized security training associated with protecting the “special” weapons. We had orders to shoot anyone who attempted to enter the ASROC magazine without authorization. In fact, no one was ever permitted to enter that space alone; there was a “two-man rule” in force. I never had to shoot anyone. In fact, even in that situation, I was never given permission to load a clip of magazine of ammunition into my gun. Until Operation Desert Storm, whenever I was on duty as an armed guard, I had always carried an empty firearm with my ammunition safely tucked away on my belt.

The evening before Desert Storm commenced, the Officer of the Deck ordered me to go ahead and place a clip of ammo into my weapon. Even on the cusp of war, I wasn’t allowed to chamber a round. But it marked the first time in my naval career that I had loaded a clip and carried a gun with ammunition in it while I was on duty.

At that point, many rumors were flying about. There were rumors that the harbor had been mined. There were all kinds of rumors that something big was going to happen and people, possibly even us, were going to die.

Many of the news reports from earlier in the year talked about how hot it was for the people deployed in the Persian Gulf region. Operation Desert Shield started in August of 1990. Arriving in January of ’91, I never experienced that kind of heat while I was there. The night of January 15th while standing around outside aboard ship as Petty Officer of the Watch, it was quite chilly. We were all bundled up with our peacoats and gloves. The air in the port of Bahrain where we were anchored was cold and damp. There was an eerie feeling of uncertainty that night. We stood there together in the damp, mostly in silence.

I had transferred to the battleship Missouri for a number of reasons, partly because I was homesick. My previous ship, the Cochrane, was homeported in Yokosuka, Japan. My first two years in the Navy were spent in training in Illinois and I was able to visit home frequently. At the time, I could purchase a round-trip airline ticket to Kansas City for $50. After I was sent to Japan, I experienced strong bouts of homesickness and I was ready to come back to the states. As a history buff, having the opportunity to join the crew of the battleship Missouri in California appealed to me.

When deciding whether to stay with the Cochrane or move on the Missouri, I couldn’t have known that war was looming on the horizon. I previously had a taste of danger on the Cochrane as well when it was deployed to the Middle East in response to the USS Stark being struck by an Iraqi missile during the Iran/Iraq war in 1987.

Because the Cochrane was a “forward-deployed” US Navy warship, we were among the first additional ships to arrive in the military build-up after the Stark incident. However being in the weapons department, we were a little disappointed that our ship was not permitted to enter the Persian Gulf because of its lack of the Phalanx Close-In Weapon System (CIWS). So we were content to steam in circles in the Gulf of Oman just outside of the Persian Gulf off of the coast of Iran. As I remember it, there was an occasional Iranian fighter that would fly in our direction until we locked on with fire control radar, then it would skedaddle back home again. Not long after we left the region, another U.S. Navy ship of the same class as the Cochrane, the USS Hoel, was sent(without a CIWS system) into the Persian Gulf along with three other destroyers to destroy some Iranian oil platforms. Oh, how we in the gunnery division would’ve enjoyed some actual live fire missions! For weeks, we steamed endless circles in the Indian Ocean, then we leave and our sister ship gets the job!

It was a disappointment, but I couldn’t know at the time that some real naval gunfire missions were still waiting for me in the future aboard the Battleship Missouri. And one of the first signs to me that my ship was headed into war was that cold night on the quarterdeck when the OOD told me for the first time to load up a clip of ammo.

I never did actually “lock and load” that pistol, with a round of ammo in the chamber. I guess a young sailor can’t be trusted with a truly “loaded” weapon unless it is absolutely necessary. But once we were underway, my attention was directed towards much bigger guns.