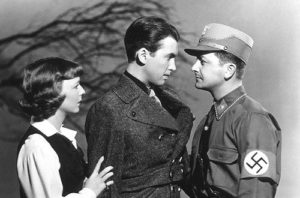 Occasionally the family and I go out to the theatre to see a movie. Mostly we just stay home because typically when I shell out hard earned dollars to see the latest thing out of Hollywood, I come home disappointed. Seriously, the ‘hit or miss’ at the theatre has become mostly ‘miss’ in my book. Earlier this year on Facebook, I complained about the awful Planet of the Apes movie that came out this sumer. Most recently, my family saw Star Wars: The Last Jedi at the local theatre. My kids loved it, but I was not impressed.

Mostly, over the past few years, while I’m home for Christmas break, I like to DVR a bunch of movies and watch them. I like to scan through the TCM offerings, and if the description sounds good I’ll record it. The other channels have some good movies too, but TCM’s are commercial free, and all classics that somebody somewhere has decided they are worth showing. I’ll watch a bit of the film and if it draws me in, I’ll watch the whole thing. If not, I’ll either watch something else, or I’ll take a nap. I have found some great films using this method, and also have taken some great naps.

This week, I came across a great show called The Mortal Storm. It featured some actors that I recognized, Jimmy Stewart and Robert Young, among others. It was set in 1933 Germany when Hitler first came into power. It was made by MGM in 1940, before the US was involved in the war in Europe, and was deeply critical of the German leader and his policies. I think that it is interesting how a Hollywood studio took a stand in uncertain times, and wonder if such a thing could happen today.

What struck me most, I think was the professor character who was arrested. I remember from my history lessons that in Nazi Germany all of the intellectuals, including the professors, who dissented in any way were rounded up and done away with. This was the first time I recall seeing that historical fact portrayed on film.

I wondered what it would take for a similar change of tide to occur in our country? How would I react? Almost everyone in the film seemed to buy into the new way of thinking. The professor’s family was split, with his sons aligning with the Nazi’s, while he and his wife and daughter held out against them. The daughter’s fiancee joined up as well, and she refused to go along for the ride.

I thought it was a very dramatic film with a compelling storyline. I could see parallels to what is happening in the world today. Our country seems very sharply divided along such different points of view of what is right and wrong. It is a little disturbing to wonder about the future. How many folks would stand up for what is right? How many would go along with what seemed to be the popular point of view, right or wrong as it may be?

If you get a chance to see The Mortal Storm, I recommend it. It will make you think.

For several years, I’ve wanted to make the Christmas lights blink to music. I finally made it happen this year using Lightshow Pi software and a Raspberry Pi computer. For an extra bonus, I recorded my daughter and I singing at a recent Christmas concert. I put that recording into my lighting system, and here is the result: