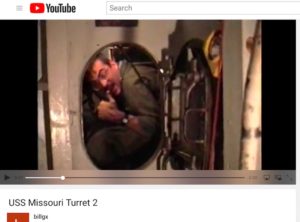 January 17th marked the 29th anniversary of the first day of Operation Desert Storm. I know, I know, it was January 16th in the US, but in the gulf, it was already the morning of the 17th. To celebrate, I made a couple of drawings of an incident that happened on my ship while I was there. After the cease-fire, the ammunition magazine of turret number 2 was flooded. I had to lead a team into the bowels of the ship, all the way down to Deck 7, to dry out some of our fire control system wiring that had been soaked with sea water. Interestingly, the insulation on our wiring was from the 1940s, a time in which plastic had not been invented yet, so each wire was wrapped in cotton fabric braided material. Needless to say, the salt water caused a bunch of short circuits. My team had to blow dry each wire and check it for shorts. It took us many hours to get everything dried out and the hardest part was the fact that we were crouched down in a dark, damp crawl space, not really made for human habitation. It was only about four feet high, if I remember right, not even big enough for a child to stand upright in.

The first drawing is taken from a YouTube video that I posted of us going in and out of the crawl space. The second is simply from memory of what it was like to be in that space. 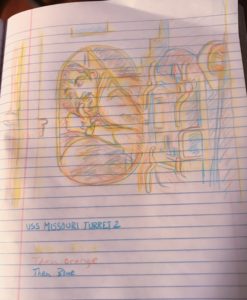 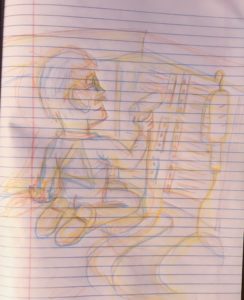 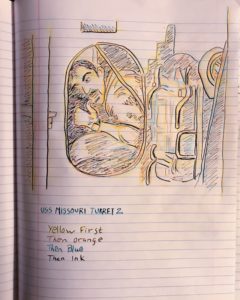 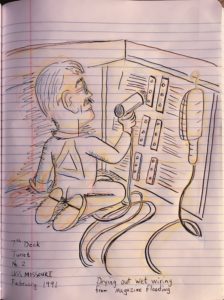 I made 3 color sketches, starting with yellow, then re-drawing with orange, and finally redrawing the same picture with blue. The final step is to ink it in.

This is a new technique for me to try that I learned about via Lynda Barry’s Instagram.

I think I spent about four hours doing these two drawings. If I follow Lynda B’s example, I am still ten drawings and 20 hours away from making a dozen pictures of the same scene. With school starting next week, it might take me a couple of weeks to get that done. We’ll see…