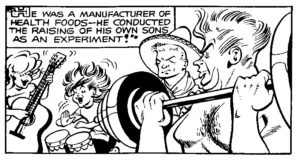 So THAT’s what she was saying! When I was a kid, sometimes my grandma would say my siblings and I were just like the Nicky-Hokey boys, and we never knew what she meant.

According to the Dick Tracy wiki, the father of the Neki Hokey boys

believed that a lack of discipline and traditional child-rearing would promote creativity and inventiveness in his sons, and they were given very little in the way of guidance and supervision. As a result, the boys were extremely rambunctious, disrespectful to authority, and difficult to control.

People who know me well would probably say this sounds about right.