It is good to make records of where you stand, just so you are able to see growth over time. As a kid, I made marks on my wooden closet door to track my height. I was such a slow growing kid, it took me several years to grow six inches!

I wish I had thought of doing this when I first started out using social media. I would have seen a lot of rapid growth in the early days, followed by some years of stagnation while I worked on my Ph.D. Now that that project is completed, I’ve started some online activities back up again. So I can track my progress this year and into the future, here are some benchmarks of where I stood in January of 2018.

LinkedIn is a newer form of social media, and I haven’t been a very active user on that platform either. Below is a snapshot of my LinkedIn profile information.

On January 20, 2018 I had 711 followers on LinkedIn. I also had 29 profile views, 124 post views and 3 search appearances. At this point, I don’t really know what time frame those stats occurred in, whether they are over the last month, or since I joined LinkedIn. My profile strength was listed as Intermediate. 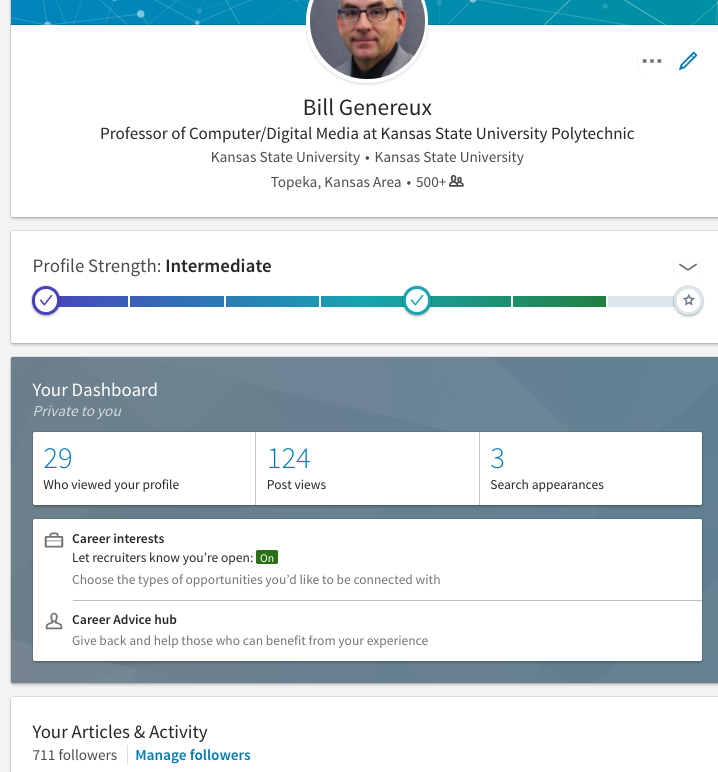 Out of all of these, I’ve used YouTube the longest. For some reason, I have two YouTube profiles, billgx and bgenereux. I seem to remember this forking happening because I couldn’t recover the login to my billgx gmail account and I wanted to use gmail, so I made a new account bgenereux. Interestingly, I still have full control of billgx on YouTube. I just can’t read billgx’s email for some reason. 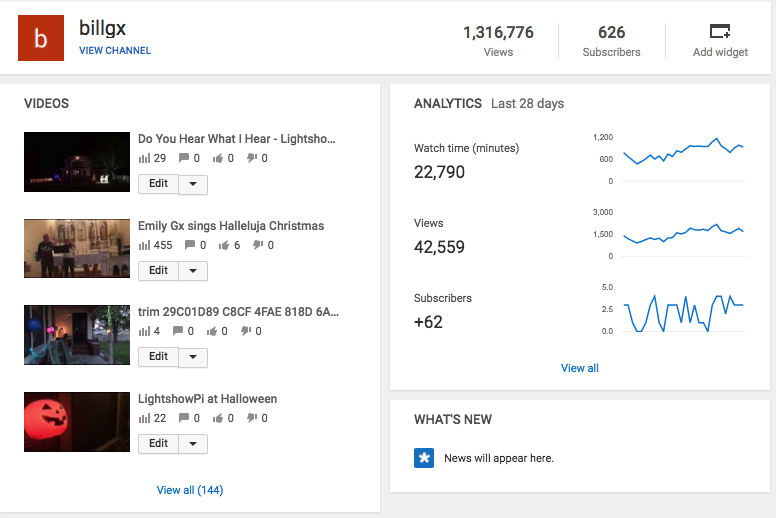 My Bgenereux youtube account gets a lot less attention. In January 2018, I accidentally started posting videos related to the DIGME406 Social Media class, and just kept going with them. So I’m going to benchmark it to see what happens with this new activity.

On bgenereux, I currently have a lifetime total of 888 views and 0 subscribers. I had 203 minutes watched during the past month, and 79 views. On January 20, 2018 I had 12 videos uploaded on this channel. 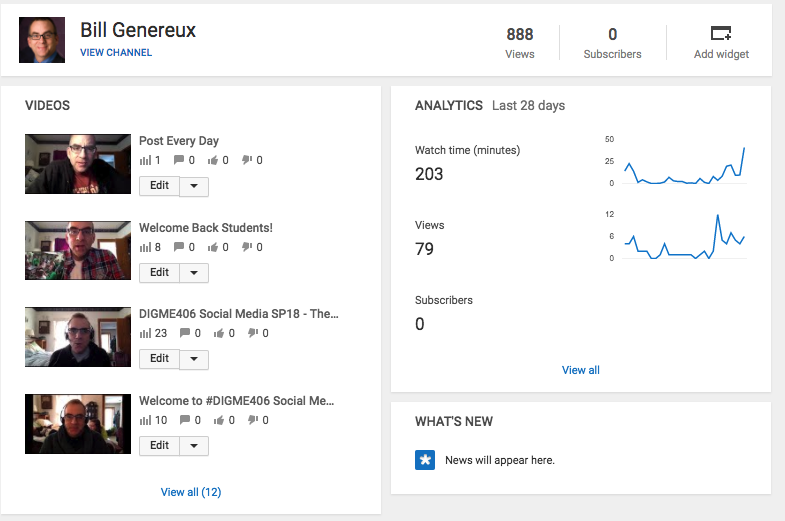 I’m also including information about my billgx Facebook profile. On January 20, 2018 I had 900 friends on Facebook. I used to have more than this, but I’ve done some housecleaning and removed some people I don’t know and I know some people have “unfriended” me as well.

I’m pretty open about who I will connect with on Facebook. I suppose it could cause me problems at some point. But so far, the benefits of being open to new connections with people I don’t know have outweighed the risks. It used to be that I knew everyone I connected with on Facebook personally, while nearly everyone I connected with on Twitter, I had never met in person. For the most part, it is still true of Twitter, but my Facebook friends have more virtual friends in the mix now than before, and I feel my network is improved because of it.