Amy Schumer responded to a stranger on the Internet who Photoshopped her to make her appear slimmer. She writes,

“I like how i really look… The other picture looks nice but it’s not me.” 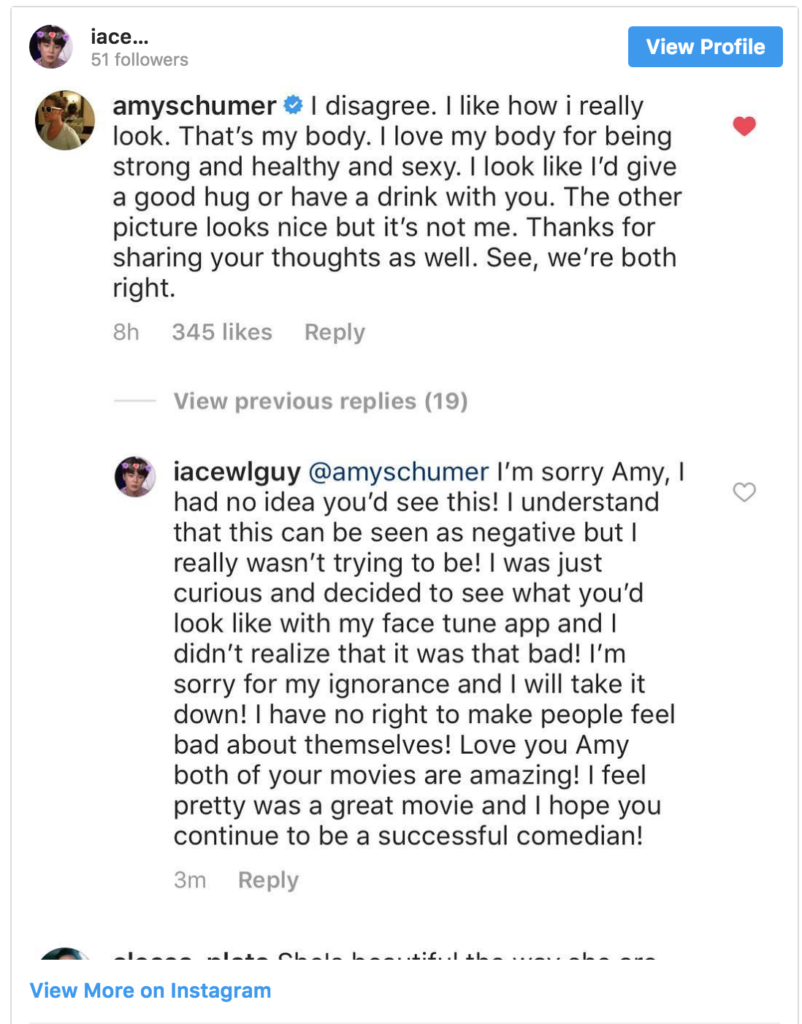 The young man replied, “I’m sorry Amy, I had no idea you’d see this…”

It’s none of our business. It is everyone’s business.

Really, why should anyone be telling Amy Schumer how she should look? I guess he admitted he didn’t ever imagine she would see it, let alone respond to it. The only thing I can think of is that she is in the public eye and makes her living as a celebrity. It is fun to discuss these people and even to “improve” them with software. But do we really have a right to make comments or suggestions on their appearance?

Celebrities are people too. Some famous people make their living by willingly being objectified. Is it any wonder then that some people want to project that set of values on to all celebrities? Kudos to Amy Schumer for speaking up about this.

It is interesting that people who create these “better” celebrity images delete them after being called out. It is interesting to me that the person who posted it “had no idea she would see it.” That is the power of the internet. It can cut out the middle man. You can communicate directly with the famous and powerful.

In a most memorable incident, I once had a student who inadvertently brought the US Secret Service to our campus. I was teaching web development back when having that skill was uncommon and specialized. I had all of our students create websites on the Internet. One student made a website that included a threat to the US president at that time, G.W. Bush, I think. A few days later some men in dark suits showed up and wanted to speak with Mr. So and So, the author of that page.

Yes folks, people really do read the stuff you put online about them.