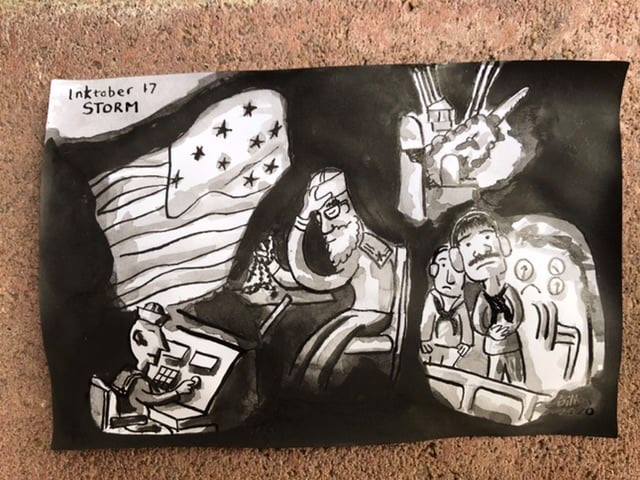 This week marks the 30th anniversary of Operation Desert Storm and I was there. The deadline for withdrawal from Kuwait had passed and in the early hours of January 16, 1991, a global coalition led by the USA went to war with Iraq.

At that point, I was in my 6th year of service in the US Navy, and it was actually my second trip to the Middle East; my first was in 1987 during the Iran/Iraq war. In 1987, Iran was of greater concern. The Iranian hostage crisis of the late 70s was still fresh in our minds, and the US was supporting Iraq in opposition to Iran.

Funny how it works out when the enemy of your enemy becomes your “friend.“ In 1987, our “friend” Iraq attacked the USS Stark on patrol in the Persian Gulf thinking it was an oil tanker. That’s how that war went, both belligerents were bombing oil tankers and the US Navy was there on escort duty.
Maybe the attack of the Stark was accidental, or maybe it wasn’t, but in 1990 when Iraq invaded Kuwait, the most oil-rich country in the world, the US took offense. It was pretty clear that Saddam Hussein was no friend.

So there I was, in January 1991, a Kansas kid who grew up with no knowledge of the sea, back for the second time in the treacherous waters of the Persian Gulf region. They warned us the evening before to get plenty of rest. They woke us up around 2 am, I think, and fed us an early breakfast. Navy chow aboard a battleship at the dawn of war is as good as anyone about to go into battle can expect. Plenty of hot coffee, bacon and eggs for everyone.

Later, we went to general quarters (battle stations) and we waited for the war to begin. In forward main battery plot, we were tuned in to CNN and Peter Arnett, broadcasting live from Baghdad. No picture, just the audio. My thoughts turned to my fellow fire control men above us, diligently preparing to let their tomahawk missiles fly. What would the Iraqi response be?

I had no mental picture of our ship’s position then, although we had one of the world’s first gps devices right there in the room with us. Lat & long numbers didn’t mean much to me without a map, and we had none at the moment. All I knew was those Tomohawks could fly from Kansas City to Denver and score a field goal through the uprights of Broncos stadium. We were hundreds of miles from Baghdad and probably pretty safe for the time being.

After the Tomahawks were launched, we sat there together in silence. Someone suggested since we were attacking at night, many of the places we were hitting might not even be occupied except for possibly the night time help. My thoughts turned to the lowly night janitor who would lose his life soon. His poor family counting on him for their support. He’s not even a military man, yet this day he will pay for his reckless leader’s sins with his life.

At that point I was pretty much a heathen, living like I’d never heard of God, but for some reason I pulled a rosary from my pocket and began to pray for everyone who would lose their lives that day. No one around me had anything to say as we sat and waited, with Peter Arnett droning on in the background about a last-minute reprieve while missiles and aircraft were hurtling right towards him.

Iraq would be pissed and they might reach out and touch us at some point. I thought about my shipmates and family back home.

It was a long wait. Over an hour, wasn’t it, before the bombs and missiles rained down on Baghdad. The fighting began. Reports of the first American casualty, a Navy fighter pilot was down and would never return home. The shit had gotten real. After six years of practicing and pretending, I was finally in it for real. But our day as battleship gunnery guys would not come until a while later.

We fired several missiles and the Mighty Mo was back in combat action for the first time since Korea. We would have to read about the Iraqi response to our attack in the Stars and Stripes because we didn’t experience anything first-hand that day.