I was looking for a quick but fun DS106/Digital Storytelling assignment to do and found it in Alan Levine‘s What They Might Have Done in Social Media project. Here is the tweet I came up with for Dr. Brinkley. 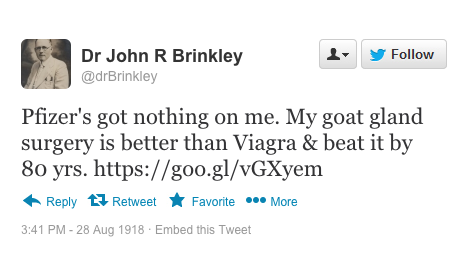 The original assignment recommended using Twister for creating a fake Twitter tweet, but a quick internet search led me to Simitator.com which has generators for fake Facebook, Yahoo and other services as well.

Most people today have never heard of Dr. John R. Brinkley, but in his day he was more famous than Justin Bieber, richer than Bill Gates, and developed a surgical procedure using “goat glands” that was believed to have similar effects as Viagra, preceding this drug by 80 years. In his time, he was a media mogul; a true household name, doing his radio broadcasts across the USA. He was the original licensee of the XER border blaster radio station in Mexico. He was also a pioneer in distance learning and mediated education, doing lectures over the radio for college credit. It should also be noted that he died in disgrace, broken and penniless.