I’ll be the first to admit that my appearance is not always foremost on my mind. However, given that I do work with video a great deal in my work, whether it is myself in a video conference or recording footage of others, I do need to be aware of things one can do to look their best on film.

I found this video of tips on looking your best on video and I think it is helpful.

This is a short documentary film I made with Aaron Wertenberger at Twin Valley Telecommunications. I miss making this kind of film showcasing an interesting person in the community. Lawrence Schleuder was the best. Everyone who knew him loved him.

Here is a mini-documentary I made along with the students in my digital literacy class. Everyone was to make a video 2-4 minutes long about someone who is interesting that you don’t know well. (Here is the official DS106 video assignment.) I found Tony pedaling his recumbent bike along my morning commute, so I stopped to see if he would visit with me. This is the result.

I wrote about some of the challenges of making video this in an earlier blog. Needless to say, the shorter the video, the harder you have to work at making it something worth watching. I probably spent over ten hours making this thing, but I like how it turned out.

Thursday evening near sundown while driving home from work, I noticed the strangest thing. I saw a man a little ways off of the road climbing into what looked like a plywood box on wheels. The box looked like it was a bike trailer attached to some sort of bicycle. Like I said—strange. The next morning I was going to work I saw the man again, but this time he was on the road with his human-powered contraption. 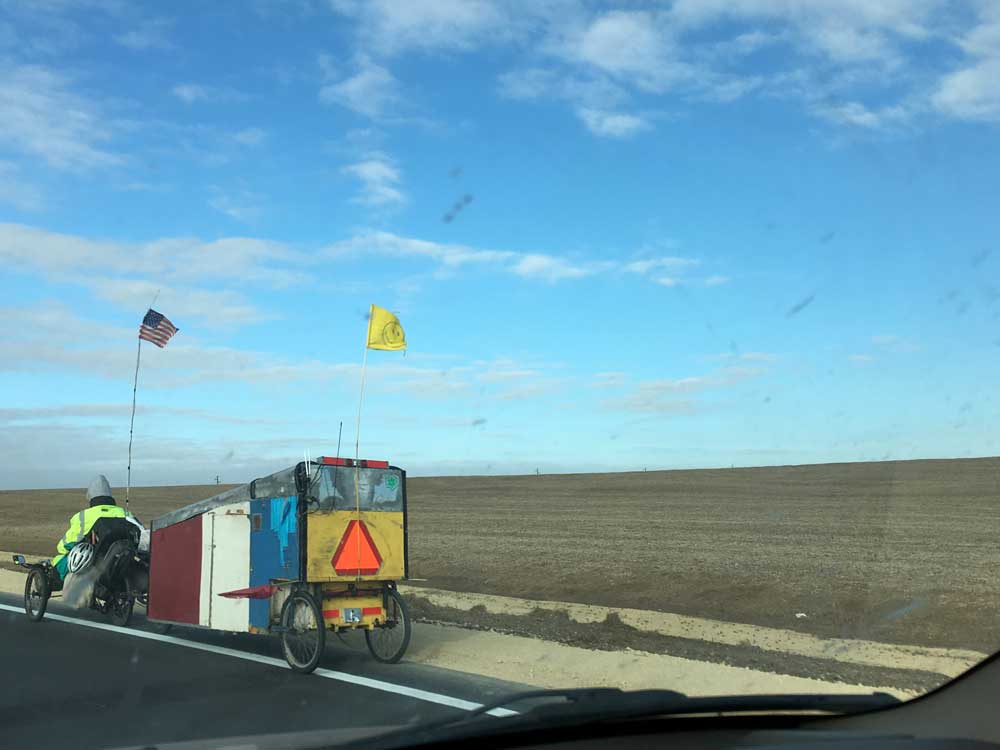 I stopped to visit for a few minutes with the man and asked him where he was going. He said he was heading to Colorado. As I drove off and headed towards work, I thought to myself that I should do the same assignment as my Digital Literacy students are working in their online course – the mini-documentary and that I should interview the cycling man for my project.

Immediately I thought about all of the reasons this idea made no sense. It would be awkward, even scary asking the stranger for an interview. I had some other things I wanted to be doing at work, so it would be an inconvenience. I didn’t have a video camera. I all had on me was a dated iPhone and old iPad Mini, both of which had their storage filled to the brim. I would have to delete some stuff to make room to record. It was freezing cold outside and a stiff wind was blowing.

So I stopped at a nearby convenience store, picked up a few energy bars and water, and drove back to where I thought I would find the man. After driving a few miles, I caught back up to him and asked if he could spare a few minutes to talk to me. He agreed, so we found a spot where we could pull off of the road and maybe get out of the fierce wind for a bit. 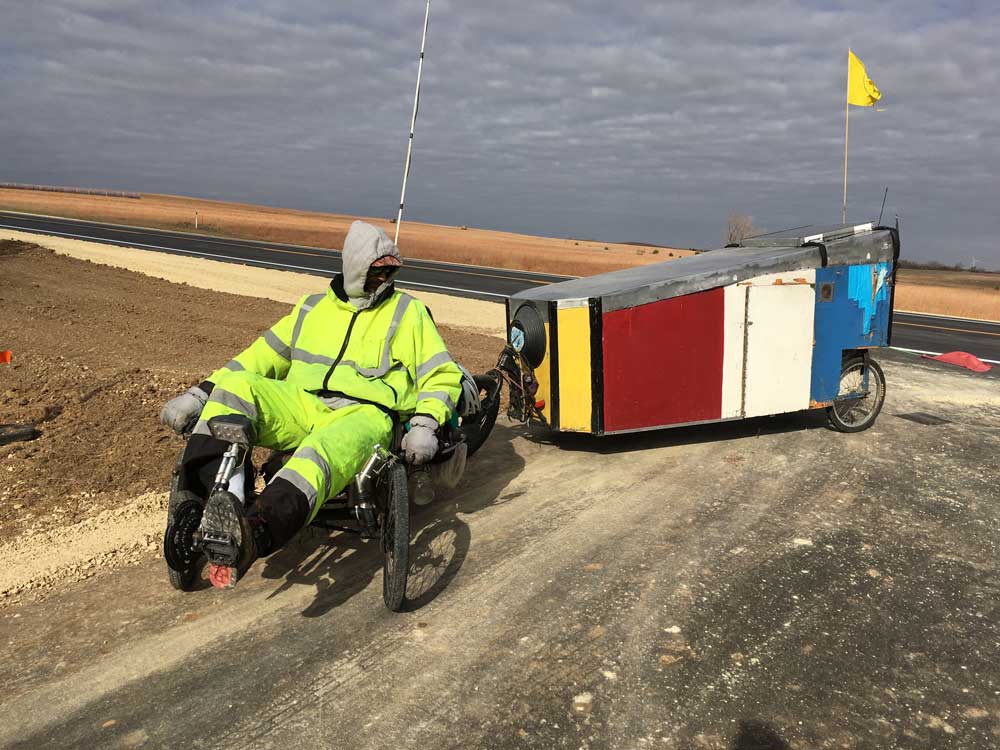 I learned his name was Tony Adams and he was returning to Colorado after riding out to Virginia and back. He told me he’s been doing these trips for the past 19 years and that he sleeps every night in his 600+ lb homemade house trailer. It is tiny but has several amenities like a propane cook stove, a DVD player and television, a cell phone and a solar panel for charging his devices. He purchased the recumbent bike he was riding and modified it for pulling the heavy trailer that he built by hand from scratch. 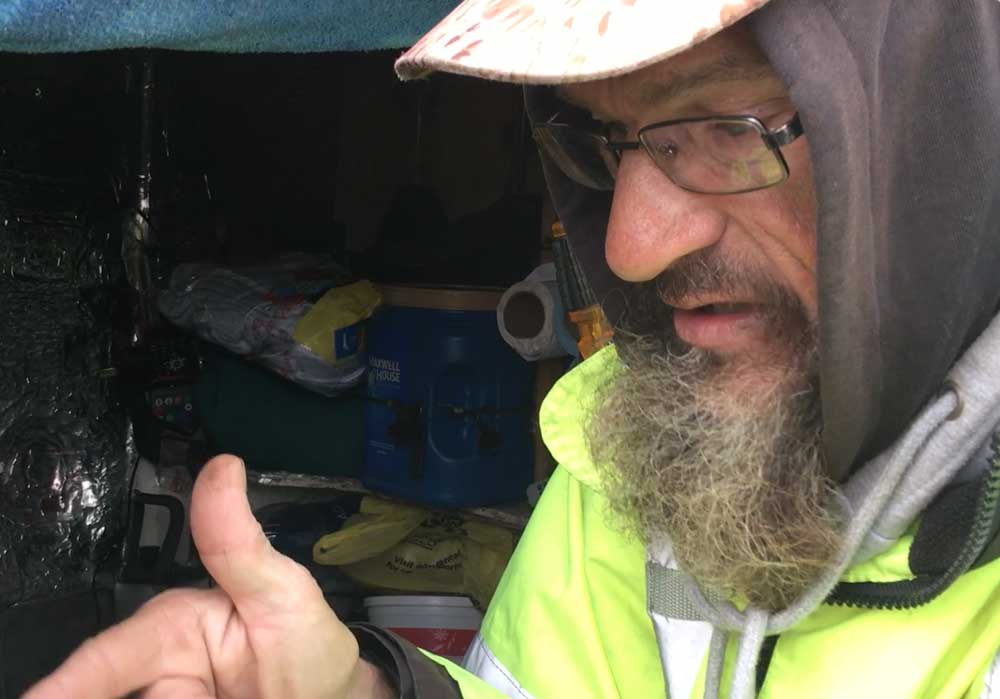 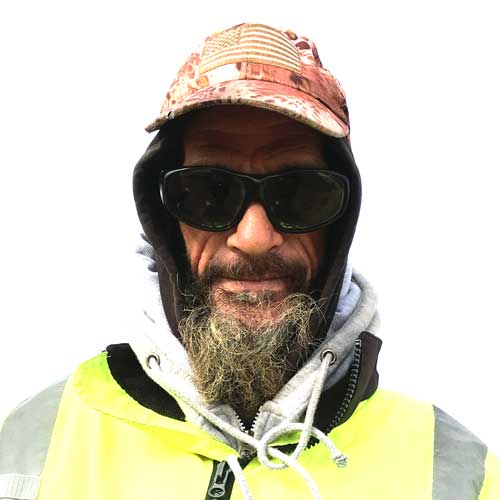 Many of the items he uses he finds along the road as he travels, including the three flags that he flies, various electrical chargers and devices. One thing he always keeps an eye out is for old cellular phones that contain SD cards. One card he found had over 30 movies stored on it, providing him hours of entertainment.

Tony was very inspiring to meet, and it makes me want to try to be a little more like him. Just do your own thing and don’t worry too much about what others think about it.

Some of the challenges:

Benefits of doing this:

I’m still working on the video editing part of the assignment, but the hardest part, meeting a stranger and getting the recordings is done.

A year and a half ago, Gillette Razors released this short video, but it took me a year to discover it in my social media feed. It is probably the most heartwarming “commercial” I have ever seen. It is a perfect example of short-form digital storytelling. I often give an assignment to my students called mini-documentary and going forward I plan to show this to my students as an example of how it is done well.

The pacing, the lighting, the sound, the music and the story all flow effortlessly. It quickly draws the viewer in and you become absorbed in the story. That, my friends, is good storytelling. Please watch first, then come back and read what else I have to say after the video.

Did you watch the video? Read no further until you do. I will wait…

You’re back? It is really good, right? Ok, I have more to say, but that will come in another post. Click here to continue…

Fifty years ago, one of the best television shows ever made was first aired – Star Trek! We love Star Trek at my house. A few years ago I made this video of myself and I thought it appropriate for today.

In an office? Celebrate #StarTrek50 by pretending you’re under attack and all falling to one side then another. pic.twitter.com/hY2kjfjOrf

So we made this video in our Digital Media class. Sulu, get those shields up!

Thanks to Paul Bond for sharing the idea with us and the commentary. http://blog.raptnrent.me/2016/09/08/awesome-moments-of-spontaneous-creativity/

PS I made a vector of Spock in celebration of Star Trek 50 too! 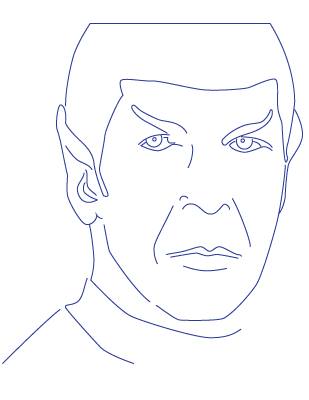 Create a short video that shows a scene from your favorite TV show or movie that we didn’t get to see. Maybe because it wound up on the cutting room floor.

Here is an example. It is from Star Trek TOS and depicts a red shirted crew member getting ready to beam down for the first time.