I’ve been working at improving my Unity3D skills. We are using Unity in the Game Programming class I’m teaching this semester. I wanted to build a project that focused on creating some GameObjects that interact with each other through various public methods. So I made a growth simulation that represents a group of bacteria eating and reproducing.

The game objects include bacteria, food, and a game manager. All the food object does is keep track of how much food is available, and provide a public method called supplyFood(), with which the bacteria can acquire food to eat. The game manager object creates a grid of food tiles to be used as a food supply. It also keeps track of the number of bacteria in the game through public methods addBacteria() and removeBacteria().

The bacteria does a number of things. I tried to make this object class self-managing. So it has a timer that makes regular calls to the eat() method, and reproduce() method is based on doing a number of eats. There is also a die() method that takes the bacteria out of the game. But it doesn’t completely work correctly yet, I’m still debugging it.

One tricky part was finding out if the bacteria was touching a food tile, so it could eat. I used a collision detection method to initiate that. It is interesting how objects can connect with one another. Here is an example of how the bacteria connects to the food.

These variables are declared to give access to the foodTile object and the supplyFood() method of its food script:

When a bacterium collides with (sits upon) a foodTile tagged “food” it opens a connection to the script it contains called “food.” I was concerned that doing this each time a new bacterium is created and collides with a foodTile, it would be a lot of processing overhead. But so far, it seems to be working.

It took me a while to understand how getComponent works. It basically allows access to any component of a given object, including scripts. object.getComponent<component>();

Here is a video of what it looks like in Unity3D right now:

One thing beginning game developers using Unity 3D might want to do early on is to have a 3rd person character that is followed around by a camera. It is fairly simple to accomplish, but it can be tricky if not done correctly.

Here are the steps. 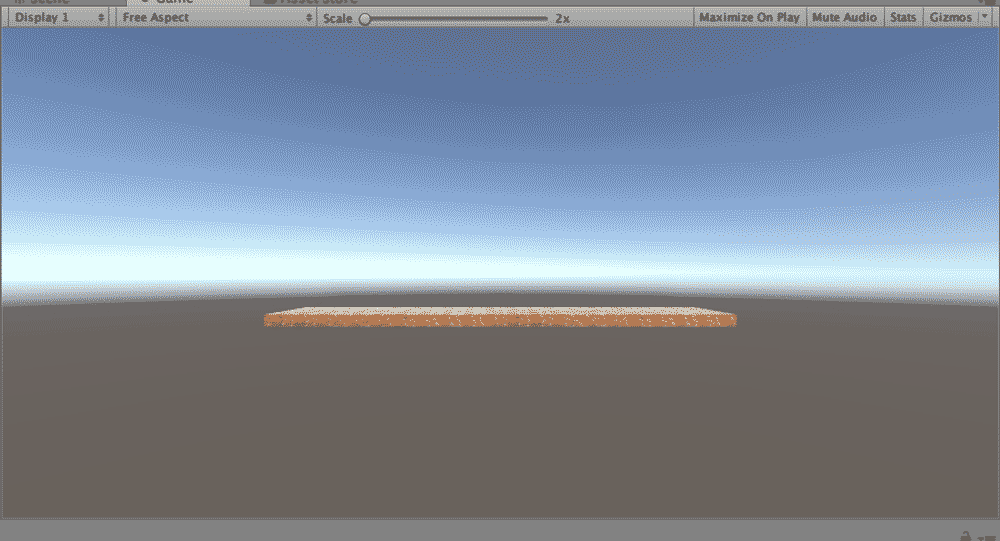 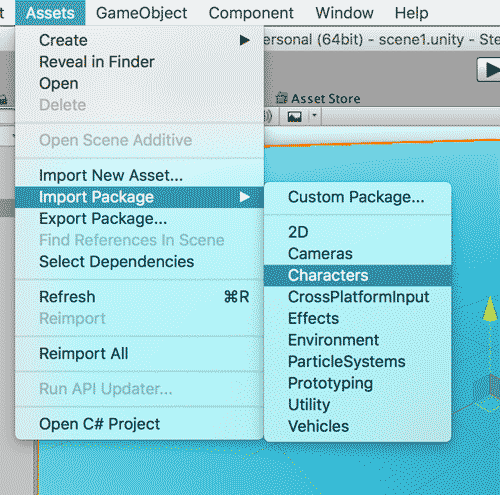 This year, in the Game Programming course I teach, at the urging of my students we have begun working with Unity3D. I’ve always used Flash in the past for this course, but some things have changed for me both personally and professionally to where I felt I could spare the time to begin with a new development platform. Any interested students or educators can learn along with us by downloading Unity3D for free.

For this post, we are going to discuss creating prefab objects (just a saved game object that has some preconfigured properties added to it) and using code to create instances of those prefabs.

To begin, let’s make a prefab object by creating a new cube (Game Object -> 3D Object -> Cube) and setting its position at (0,0,0). Rename this cube to “stepPrefab.” Scale the x dimension to 10, and the z dimension to 2, and the y dimension 0.25. This will create a plank-like block that will become a step in what will later become a staircase.

Decorate the step as you like using materials or graphics. Online, I found an image of bricks I used to make a brick texture, but you can also simply create a material and set its color to use. Once you have decorated the step, create a “prefabs” folder in the project panel under Assets. Drag and drop your decorated brick into the prefabs folder. There it will become a prefabricated object or “prefab” that we can manipulate with code. Delete the stepPrefab object from the hierarchy tab, but leave it where you put it in the prefabs folder. Except for the light and camera, our world should be empty again. 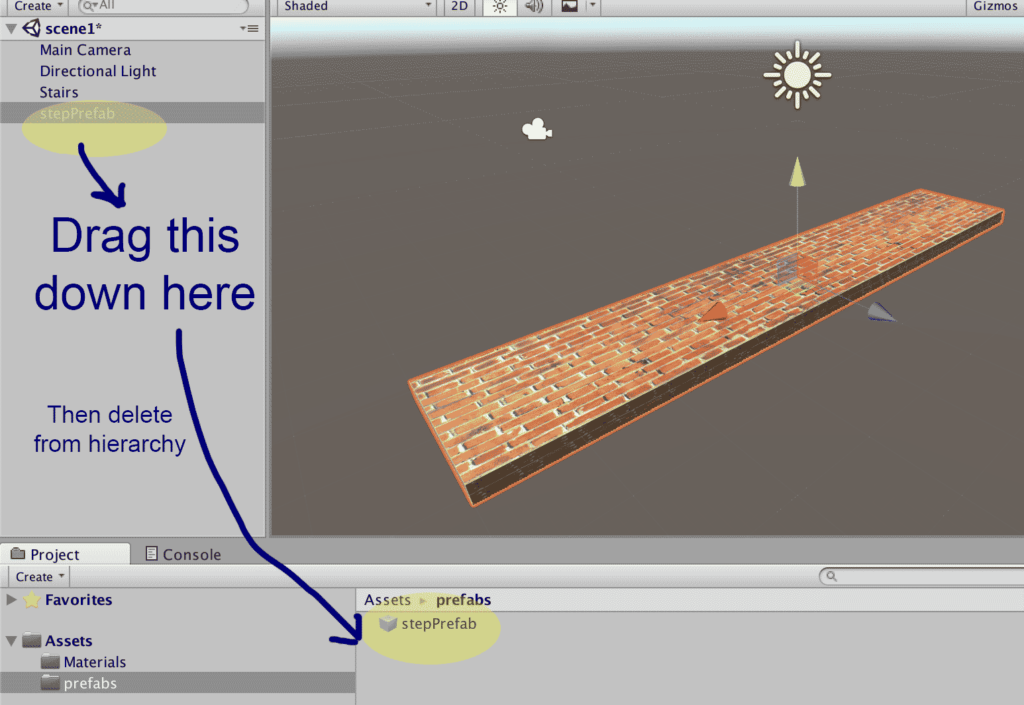 Next, create a new folder called “scripts” under Assets, also in the Project panel. Create a new C# script inside of the scripts folder, either by right-clicking or clicking on the Create button. Name this script to “MakeStep.” Double-Click the “MakeStep” script to open it in an editor.

Just inside of the MakeStep class, declare a public variable of type Game Object called “stepPrefab” and a second of type Vector3 called “stepPos” at the game’s origin position. That code looks like this:

Now, inside of the Start() function write a line of code that will instantiate (create)  an instance of our stepPrefab object. Here’s the code:

Here, the Instantiate function creates a new stepPrefab object, places it at the stepPos position, and uses no rotation (that’s the Quaternion.identity bit.)

Save and build the script. Now, switch back to Unity3D. Create an empty game object. Give it a name “stairs.” With “stairs” still selected, browse to the folder containing the MakeStep script, and drag that script on to the “add component” area of the inspector window. This should add the MakeStep script to the empty “stairs” object, now visible as a component of “stairs” in the inspector.

Inside the script component just added, locate the field box called “Step Prefab.” Right now, it should say “None (Game Object).” This is where we will make the connection between the Unity 3D world, and the MakeStep script. To do this, drag and drop the stepPrefab object in the Assets/prefabs folder over to the Step Prefab box in the inspector window. Now our world and our script should be connected together. 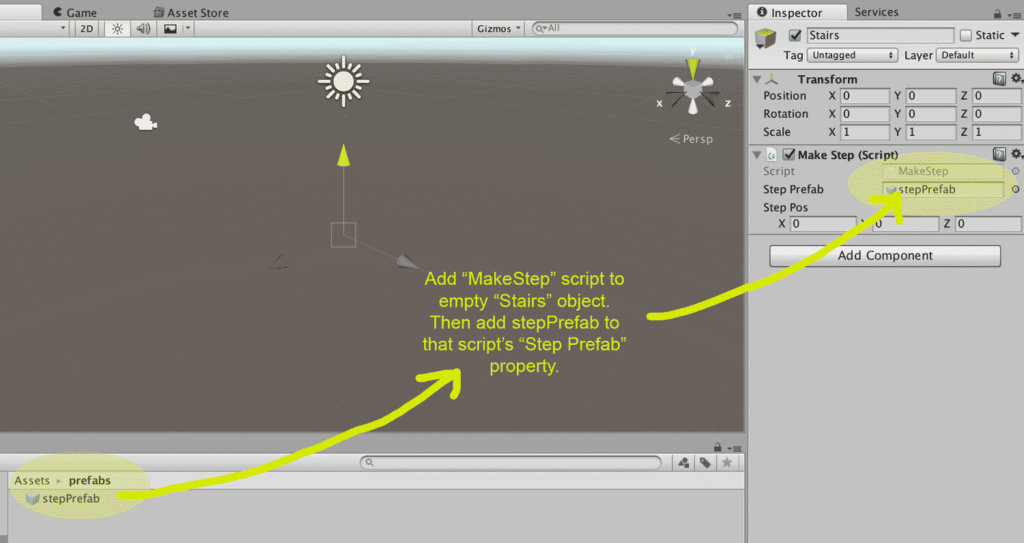 If everything is in order, it is time to test our world. Click the play button in unity. You should now see an instance of the stepPrefab object.

Next up, we will build a set of stairs using this object.

I’ve been teaching the Game Programming class with Unity 3D for two weeks now. This is the first time we’ve used Unity in the class. It’s been interesting, and a challenge to my previous knowledge on the subject. In previous iterations of the course, we used Flash and Actionscript.

Basically, instead of having a superclass and subclasses that all must conform to or override the superclass, each object is assembled out of components or capabilities.

This old JavaWorld article explained it nicely for me. https://www.javaworld.com/article/2076814/core-java/inheritance-versus-composition–which-one-should-you-choose-.html